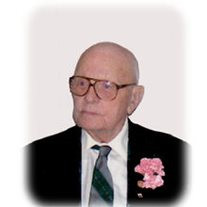 Hubert S. Rutherford, age 94 of Warrensburg, Missouri, formerly of Higginsville, Missouri, died on Saturday, September 10, 2011, at Missouri Veterans Home in Warrensburg. Born Monday, April 30, 1917 in Risco, Missouri, he was the son of John Edward Rutherford and Dora Wineinger Rutherford. He married Earlene Marie Frerking July 23, 1939. She preceded him in death February 14, 2009. Also preceded in death are his parents, a son, Keith Rutherford, four brothers, James, Ray, Virgil and Forrest Rutherford; two sisters, Beulah Johnson and Mary Gerken, and a granddaughter, Connie Sue Nejad. Hubert graduated from Orrick, Missouri High School and worked as a forklift mechanic for U.S. By-Products in Waverly, Missouri, retiring in 1979. He lived in Higginsville most of his life, moving to Warrensburg in 2010. He was a member of the Aullville Christian Church, Aullville, Missouri. He was a member of the Higginsville American Legion Post #223, Higginsville Masonic Lodge and Ararat Shrine Temple of Kansas City, Missouri. He served as a Private in the U.S. Army from 1944 until 1946 and was a Veteran of World War II. Surviving are daughters, Shirley Garrison of Kansas City, Missouri and Carol Willis of Horn Lake, Mississippi; four grand daughters, Cindy Lee Tipton, Charlotte Murfree, Susan Roach and Deonna Bashir; ; 14 great grandchildren, and 12 great great grandchildren.. A Funeral service will be at 2:00 P.M. on Wednesday, September 14, 2011 at Hoefer Chapel, 1600 Main St. Higginsville with Pastor Cheryl Sanders officiating.A Masonic Service will be held at 1:30 p.m. prior to the service. Interment will be in Higginsville City Cemetery. A Masonic Service will be held at 1:30 p.m. at the funeral home. Memorial contributions may be sent to Family Choice. Online condolences may be made to the family at www.hoeferfuneralhome.com

The family of Hubert S. Rutherford created this Life Tributes page to make it easy to share your memories.