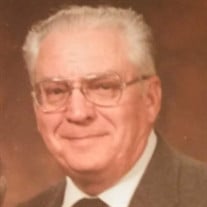 J Eldon Whitsitt, 91 of Higginsville, Missouri passed away on Sunday, April 17, 2022, at Meyer Care Center in Higginsville, Missouri. He was born Thursday, January 29, 1931 in Mayview, Missouri, to the late Preston Whitsitt and the late Iola Whitsitt (Davidson). J Eldon graduated from Higginsville High School - class of 1948. He worked for General Motors Assembly Plant in Fairfax on the auto assembly line. He married Doris (McCulloch) Whitsitt on May 12, 1950. They spent 66 blessed years together until her passing on December 11, 2016. In 1957, they purchased a farm in Mayview close to his parents, and started farming. J Eldon enjoyed fishing but enjoyed watching his grandchildren fish even more. He adored his grandchildren and enjoyed spending time with family. He was known to deer hunt in his younger years. J Eldon was great at playing cards and enjoyed teaching his children how to play. Even just a few weeks before his passing, he was playing cards and teaching family members how to play, Kings on the Corners. J Eldon and Doris were fond of Branson, Missouri and took many trips year after year. J Eldon was a Democratic Committeeman for the Washington Township in Lafayette County Missouri. He was a member of the Lafayette County Johnson Grass Board, he served on the Mayview School Board, and he was a UAW member since 1948. He was an active member of the Mt. Tabor United Methodist Church in Odessa, Missouri. Surviving are one daughter, Vickie Whitsitt of Higginsville; three sons, Stephen Whitsitt of Lee’s Summit, MO, John (Kim) Whitsitt of Raytown, MO and Bruce (Debbie) Whitsitt of Odessa, MO; one brother, Marvin Whitsitt of Higginsville; six grandchildren, Greg (Mandy) Whitsitt, Marla Rischling, Kassie Cates, Michael (Jaime) Whitsitt, Jennifer Whitsitt, Jay (Alex) Whitsitt; and eleven great-grandchildren. He was preceded in death by his parents; wife, Doris; one brother, David Whitsitt; one sister, Mary McCoy; and one daughter-in-law, Joyce Whitsitt. The family will receive friends from 6:00 PM to 8:00 PM on Wednesday, April 20, 2022, at Stewart-Hoefer Funeral Home, 1600 Main St. Higginsville, Missouri. A funeral service will be held at 1:00 PM on Thursday, April 21, 2022 at Mt. Tabor United Methodist Church at RR 1 Box 46-1a, Odessa, Missouri with Rev. John Churchill officiating. Interment will follow in the Higginsville City Cemetery. Casket Bearers: Greg Whitsitt, Marla Rischling, Kassie Cates, Michael Whitsitt, Jennifer Whitsitt, Jay Whitsitt. Memorials may be made out to Mt. Tabor UMC or Crossroads Hospice or Meyer Care Center.

The family of J Eldon Whitsitt created this Life Tributes page to make it easy to share your memories.

J Eldon Whitsitt, 91 of Higginsville, Missouri passed away on...

Send flowers to the Whitsitt family.