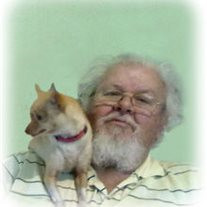 James P. "Jim" Giger, Sr., age 71 of Higginsville, Missouri died on Tuesday, December 30, 2014, at his home. Born Tuesday, March 23, 1943 in Marshall, Missouri, he was the son of the late Henry Huston Giger and the late Lucille (Fizer) Giger. He was united in marriage to Delma S. Greife October 4, 1974. Jim lived in Higginsville for the past 40 years. He was employed as a maintenance supervisor at the Higginsville Habilitation Center and was also the Fire & Safety Supervisor there, retiring in 2004. He was a member of the First Baptist Church in Higginsville. He was well respected in business and his personal life. Jim enjoyed flea markets, Budweiser collecting, his pets, and being a kidder. He had a love/hate relationship with the KC Chiefs, and Higg Country Fair, where he did enjoy serving good burgers. Preceding him in death are his parents, one daughter, Lora Engelhardt, one brother, Joe Giger and one grandson, Chase Engelhardt. Surviving are his wife, Delma Giger of the home in Higginsville; two sons, James Patrick (Charla) Giger, Jr. of DeWitt, Missouri and Billy (Gina) Engelhardt of Blue Springs, Missouri; one brother, Johnny Giger of Slater, Missouri; four grandchildren, J.P. Giger, Meghan (Donte) Goodwin, Madelyn Engelhardt, Nick Engelhardt; and 6 great-grandchildren. A Funeral service will be at 2:00 P.M. on Saturday, January 3, 2015 at Hoefer Chapel, 1600 Main St. Higginsville with Dr. Greg Fine officiating. Interment will be in the Higginsville City Cemetery. The family will receive friends from 1:00 P.M. to 2:00 P.M. on Saturday prior to the service. Memorial contributions may be made to the Higginsville Fire Department. Pallbearers are Mark Oberg, Mark Lamphier, John Rodenberg, Elden Knipmeyer, Gary Lefman, Ronnie Trice, Randy Crawford and August Shull. Online condolences may be made to the family at www.hoeferfuneralhome.com

The family of James P. "Jim" Giger, Sr. created this Life Tributes page to make it easy to share your memories.