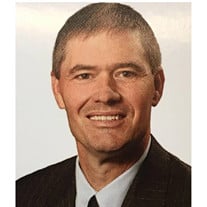 Jeffery Roy Hunt, 49 of Higginsville, Missouri passed away on Saturday, July 10, 2021, at his home. He was born Wednesday, August 11, 1971 in Sedalia, Missouri, and was the son of the late John "Jack" Hunt and Linda Hunt and husband, John Streit of Sedalia, MO. Jeff was a graduate of Windsor High School, Class of 1990. While in high school Jeff participated in football, basketball and track. He also was involved with FFA and FBLA. His football teams had multiple conference championships, district championships and playoff appearances. He earned conference, area and district honors as a wide receiver and defensive back. He was proud to be known as part of the "Fearsome Foursome" that dominated the football field and was followed by the local press as well as local fans. In track, he was a member of the I-70 Conference and district championship squads. As a member of the “hurdle dynasty” he was a state qualifier in the 300-meter intermediate hurdles. Jeff married Jill (Keller) Hunt on July 18, 2000, and from this union they loved their five children; Keller Lewis, Jackson, Ethan, Jenna, and Cole Hunt. Jeff's love of sports brought him great joy and pride in watching his children with their athletic achievements. He enjoyed coaching his children as well in youth football, basketball and softball. Jeff spent most of his working career in agriculture, first helping his father on his farm until his father's passing and then working on poultry farms working for Rose Acre Farms as a Feed Mill Manager in Knob Noster, Missouri. He was a member of the United Methodist Church in Windsor. He is also survived by one sister, Jackie (Ben) Moore of Cumming, Georgia. He is preceded in death by his father, John "Jack" Hunt; and one daughter, Eleanor Jane Hunt. A visitation will be held from 11:00 AM - 1:00 PM on Wednesday, July 14, 2021 at Stewart-Hoefer Funeral Home in Higginsville. A graveside service will follow at 1:00 PM in the Higginsville City Cemetery officiated by Rev. Clifton Dudley. Casket Bearers: Todd Lynde, Nate Moore, Keller Lewis, Ben Moore, Brian Alexander, John Streit. Memorials may be made out to Lafayette County C1 - Brighter Futures or First Call for Lafayette County.

Jeffery Roy Hunt, 49 of Higginsville, Missouri passed away on Saturday, July 10, 2021, at his home. He was born Wednesday, August 11, 1971 in Sedalia, Missouri, and was the son of the late John "Jack" Hunt and Linda Hunt and husband, John Streit... View Obituary & Service Information

The family of Jeff Hunt created this Life Tributes page to make it easy to share your memories.

Jeffery Roy Hunt, 49 of Higginsville, Missouri passed away on...

Send flowers to the Hunt family.