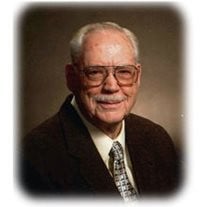 Jerry Allen Staley, age 80 of Higginsville, Missouri died on Friday, April 3, 2015, at St. Mary's Medical Center in Blue Springs, Missouri. Born Monday, January 7, 1935 in Kansas City, Missouri, he was the son of the late Vannoy Wilson Staley and the late Helen Marie (Donnell) Staley. He and Joyce Ann Hobbs were united in marriage December 21, 1957. Mr. Staley was a 1953 graduate of Paseo High School, attended William Jewel College two years, and graduated from the University of Missouri-Rolla in 1962 with a Bachelor of Science degree in Electrical Engineering. He served as a Sp3 (T) in the U.S. Army from 1954 until 1957 and was a Veteran of the Korean War. He was employed as an Electrical Engineer for the Army Corps of Engineers, retiring in 2001. He lived in Alaska, California, and then moved to Higginsville in 2001 where he was a member of First Baptist Church. Surviving are his wife, Joyce Staley of the home in Higginsville; one son, Jacob (Cari) Staley of Waterford, California; two daughters, Julie (Bruce) Gillham of Rescue, California, Jeanette Staley of Vancouver, Washington; two sisters, JoAnn Gardner of Kansas City, Missouri, Kathy (Paul) Flaherty of Overland Park, Kansas; 5 grand children and 3 great grand children. A Funeral service will be at 10:00 A.M. on Wednesday, April 8, 2015 at the First Baptist Church, 1907 Peach St. Higginsville with Dr. Greg Fine officiating, Jolene Vereecke as pianist and Dennis Million as Vocalist. Interment will be in the Missouri Veterans Cemetery in Higginsville. The family will receive friends from 9:00 A.M. to 10:00 A.M. on Wednesday at the First Baptist Church, 1907 Peach St., Higginsville. In lieu of flowers, the Family suggests Memorial contributions be made to First Baptist Church Building Fund. Pallbearers are Dustin Elliott, Drew Elliott, Brue Gillham, Michael Gillham, Jeffrey Gardner, and Jacob Staley. Online condolences may be made to the family at www.hoeferfuneralhome.com

The family of Jerry Allen Staley created this Life Tributes page to make it easy to share your memories.

Send flowers to the Staley family.