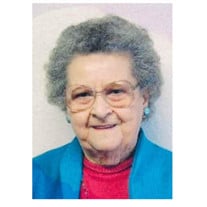 Jessie Mae Farley (Heiple), 98 of Higginsville, Missouri passed away on Wednesday, September 23, 2020, at Meyer Care Center in Higginsville. She was born Wednesday, June 7, 1922 in Bates City, Missouri and was the daughter of the late Harry Heiple and the late Bertha (Pitzer) Heiple. Jessie married Irwin Eggers on October 19, 1939, and from this union four children were born. Irwin preceded her in death on May 30, 1964. On April 14, 1973 Jessie married Thomas Farley and they were married 19 years before his death in 1992. Jessie attended elementary education at a country school before attending grade school in Mayview, Missouri. As soon as she was old enough to work and care for siblings, she left school to help the family. She was the oldest of 12 children. She worked for the Higginsville Garment Factory for over 20 years until its closing. Jessie also spent a few years working for the Higginsville Habilitation Center until her retirement. Jessie enjoyed cooking, baking, candy making, and was known for her Divinity and Fudge. She was a strong and hard worker. In her generation women in factory work had to prove they were able to keep up. This work ethic showed at home too. She enjoyed caring for the yard and flower beds. She enjoyed keeping a garden and reaping the rewards of a good harvest with lots of canning. Family was very important to Jessie. She loved caring for her children and grandchildren. Jessie never missed her Heiple family reunions, attending every year for 50 years. Jessie cherished her time living at Magnolia Manor and Meyer Care Center. She enjoyed the closeness of friends and compassionate staff. She was such a caring and giving person that she wouldn't push the nurse button because she knew the staff were very busy and didn't want to bother them. Jessie always put others first and was a giver, not a taker. Jessie will be greatly missed by her family, friends, and her entire community. Surviving are two sons, Irving "Sonny" (Lee) Eggers of Platte City, MO and Ron (Renee) Eggers of Excelsior Springs, MO; two daughters, Doris (Jim) Lieser of Higginsville, MO and Wilma Kleinschmidt of Salina, KS; two brothers, Buddy (Lois) Heiple of Independence, MO and Ed (Jan) Heiple of Lone Jack, MO; four sisters, Shirley Ritchie, Marguarite Karl, Esther Smith and Barbara Sorden; twelve grandchildren, twenty-four great grandchildren, and 12 great-great grandchildren. She was preceded in death by her parents; first husband, Irwin Eggers and second husband, Thomas Farley; five sisters, Margie Fay Heiple, Doris Stolken, Roberta Franklin, Betty Ritchie and Dorothy Wilson. A funeral service will be held at 2:00 PM on Monday, September 28, 2020 at Grace United Methodist Church with Rev. Mary Biesemeyer officiating. Interment will follow in the Higginsville City Cemetery. A visitation will be held one hour prior to the service at the church. Casket Bearers; Ike Eggers, John Eggers, Bryce Lieser, John Lieser, Ed Schneider, Duane Steffens. Memorial Contributions may be made out to the Meyer Care Center Employee's Christmas Fund. Because of current health conditions, masks and social distancing are highly encouraged.

Jessie Mae Farley (Heiple), 98 of Higginsville, Missouri passed away on Wednesday, September 23, 2020, at Meyer Care Center in Higginsville. She was born Wednesday, June 7, 1922 in Bates City, Missouri and was the daughter of the late Harry... View Obituary & Service Information

The family of Jessie Farley created this Life Tributes page to make it easy to share your memories.

Send flowers to the Farley family.