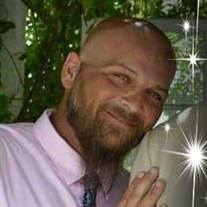 Justin Michael Stewart, 37 of Higginsville, Missouri passed away on Wednesday, January 8, 2020, at Centerpoint Medical Center in Independence, Missouri. Born Monday, February 15, 1982 in Kansas City, Kansas, he was the son of Mike and Becky Stewart of Overland Park, KS. Justin was the beloved partner of Stephanie Smith (Summers) and she survives of the home. Justin graduated high school from Shawnee Mission North in Overland Park. He attended trade school to become a Glazier Glass Setter. He installed commercial glass and worked construction. In Higginsville he worked for Ryun Brothers Pool & Spa and worked part-time for Zybisco's Bar & Grill. Justin enjoyed hunting and fishing in his spare time. He would best be described as a jack of all trades, being able to fix almost anything. Justin was taught as a child to Reduce, Reuse, and Recycle. It came as no surprise when his loved ones learned he was an organ donor, giving quality of life to others in desperate need. Justin was a member of the Queen of Holy Rosary Church in Overland Park. He is survived by significant other Stephanie Smith (Summers) of the home; parents, Mike and Becky Stewart of Overland Park, KS; maternal grandparents, Wallace and Joyce Hook of Linn Valley, KS; two sons, Ace Stewart of Overland Park, Paxton Olberding of Basehor, KS; two daughters, Haley Stewart of Overland Park, Piper Olberdling of Basehor; one brother, Ryan (Gina) Stewart of Tonganoxie, KS; two nephews, Mason Stewart of Tonganoxie, Asher Stewart of Tonganoxie; extended loved ones, Johnnie and Bobbi Summers of Higginsville; Blake Clark of Blue Springs, MO and Collyn Smith of Higginsville; Paisley, Jaxson, Blakely, and Maddix. He was preceded in death by his beloved cousin Jason Chafin; great-grandmother, Betty Ruth Gregory; and paternal grandparents, Guy and Carol Kilpatrick. A Celebration of Life will be held from 5:00 PM to 7:00 PM on Saturday, January 18, 2020, at Hoefer Funeral Home, 1600 Main St. Higginsville. Memorial contributions may be sent to Family Choice.

The family of Justin M. Stewart created this Life Tributes page to make it easy to share your memories.

Send flowers to the Stewart family.