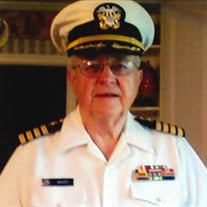 Kenneth Hugh Bauer, 83 of Higginsville, Missouri took his Lord's hand on Thursday, December 23, 2021, at home in Higginsville. He was born Sunday, February 20, 1938 in Corder, Missouri, and was the son of the late Hugo Bauer and the late Katheryn (Alpers) Bauer. He graduated from Corder High School in 1956. He graduated from Central Missouri State University in 1961 with a Bachelor's in mathematics and physics. After graduating he joined the United States Navy. While serving in the Navy, Ken earned a Master's degree in nuclear physics. He retired from the Navy in 1971 but served an additional thirteen years in the Naval Reserves. He continued to educate himself and earned a second Master's degree in Business Administration (MBA) from California Lutheran University. In addition, he recorded the effect of high radiation lasers on plants and animals on San Nicholas Island and the Shores of California. He was a nuclear weapons effect instructor at Kirtland AFB in Albuquerque, NM, where he toured and reviewed the effects of Nuclear Weapons detonations; his thesis report on these findings is published with the Naval Postgraduate School in Monterey, CA. He continued to work as a civilian for the Navy as a senior engineer at Hughes Aircraft Company for another eleven years, bringing his naval career total to thirty-three years. In 1984, Ken returned to Higginsville and accepted a position as a program manager with the U.S. Department of Energy in Kansas City, working another twenty years. Ken met his first wife, JoAnn when he joined the Navy in California. They were married from 1962 until her passing in 2000. He married Linda (Tracy) Bauer in 2001 and she survives of the home. Ken was very active within his communities and served with many organizations. He was a past president of the Confederate Memorial Friends Association, member of the American Legion and served on the Honor Guard, member of the Corder VFW, member and past treasurer of the Harvey Higgins Historical Society, member of the Community Council, member and past treasurer of the Corder Alumni Association, member of the Warrensburg Genealogical Society, member and past zone coordinator of the Corder Lions Club, member of the Sigma XI Scientific Research Society, and a life-long and active member of Immanuel Lutheran Church. Ken was intelligent and well read, having a vast collection of books. He was a history buff and was drawn to learn as much as he could. He enjoyed traveling with his wife, Lin. Ken enjoyed hunting and fishing in his younger years, but most of all he loved his family. He loved spending time with his grandchildren and attending family gatherings. Ken touched the lives of many with his extended careers, influenced many with all his civil and charitable volunteering, and will be greatly missed by all. Surviving are his wife, Lin of the home; two step-sons, John (Charlene) Wood of Bates City, MO, Ken (Deanna) Wood of Murfreesboro, TN; one step-daughter, Jeanna (Ryan) Roepe of Corder; one brother, Gary (JoAnn) Bauer of Corder; one sister, Carol (Jim) Squires of Columbia, MO; grandchildren, Kelcie Wood, Emma Wood, Erin Wood, Levi Roepe, Elias Roepe, Charlotte Roepe, Nicole (Ryan) Malloy, Crystal Bauer, Kenny Bauer; great-grandchildren, Jasminn Haynes, Alexis Munson, Hunter Munson, Gavin Bauer. He was preceded in death by his parents; first wife, JoAnn Bauer; and one son, Chris Bauer. The family will receive friends from 6:00 PM to 8:00 PM on Monday, January 3, 2022, at Stewart-Hoefer Funeral Home 1600 Main St.. Higginsville, Missouri. A funeral service will be held at 10:00 AM on Tuesday, January 4, 2022 at Immanuel Lutheran Church located at 1501 Lipper St. Higginsville, Missouri with Rev. Kurt Brandon officiating. Interment will follow in the Zion Lutheran Cemetery in Corder with military honors. Casket Bearers: Richard Munson, Ryan Malloy, Jack Quint, Andrew Novotny, Keith Fatzinger, Ryan Roepe, Jamie Schumaker. Honorary Casket Bearers: Hunter Munson, Levi Roepe. Memorial contributions may be made to Immanuel Lutheran Church, or Confederate Memorial Friends Association, or Corder Lions Club. Online condolences may be made to the family at www.stewarthoeferfuneralhome.com

Kenneth Hugh Bauer, 83 of Higginsville, Missouri took his Lord's hand on Thursday, December 23, 2021, at home in Higginsville. He was born Sunday, February 20, 1938 in Corder, Missouri, and was the son of the late Hugo Bauer and the late Katheryn... View Obituary & Service Information

The family of Ken Bauer created this Life Tributes page to make it easy to share your memories.

Send flowers to the Bauer family.