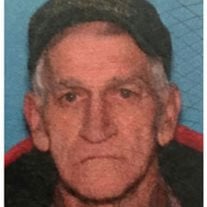 Kenneth H. Fischer, 69 of Wellington, Missouri died on Tuesday, January 10, 2017, at Lafayette Regional Health Center in Lexington, Missouri. Born Thursday, April 10, 1947 in Carrollton, Missouri, he was the son of the late Otto Fischer and the late Ona Ward Fischer. He served in the Navy during the Vietnam War from 1966 - 1970, ranking as an E-5. He married Sharon Franke Fischer on March 25, 1972 and she survives of the home. They moved to Wellington from Lone Jack, Mo in 1983. He was a truck driver and also did construction work. He retired in 2013. Surviving are two brothers, Charles (Carolyn) Fischer of Blue Springs, MO and Bruce Fischer of Chillicothe, MO; five sisters, Fern Klausing of Carrollton, MO, Eleanor (Charles) McKinney of Waverly, MO, Nancy Smith of Waverly, Ruth Clark of Odessa, MO and Carol (Ron) Thomas of Joplin, MO. He is preceded in death by his parents and two sisters, Virginia Dunn and Mary Willey. A Graveside service will be held Friday, January 13, 2017, 11:00 AM at Missouri Veterans Cemetery, Higginsville, MO with Rev. Terry Cook officiating. Memorial contributions may be sent to American Heart Association , . Online condolences may be made to the family at www.hoeferfuneralhome.com

The family of Kenneth H. Fischer created this Life Tributes page to make it easy to share your memories.

Send flowers to the Fischer family.