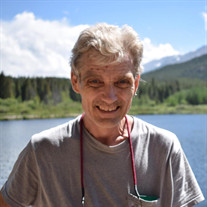 Kenneth Dale Martin entered into the presence of Jesus on Thursday, January 21, 2021, at his home in Odessa, MO. He was 55 years old. Ken was born on May 4, 1965, at Richards-Gebaur Air Force Base in Belton, MO. He is the second of three children. He loved his adventures as the son of a Senior Master Sergeant in the Air Force and got to live in various places like Kansas City, MO and San Bernardino, CA for eight years; and even in England for three years. After retiring from the Air Force in 1981, Ken’s father moved the family to Grain Valley where Ken graduated from Grain Valley High School in 1983. Ken worked at Haldex Brake Systems for about 15 years. After leaving Haldex, he worked as an independent computer technician in the IT industry. As a young man, he married Robin Williams and they had two daughters, Cari and Stephanie. His second marriage to Blanche Hare gave him another daughter, Hannah. Ken was quite the computer geek, swapping out parts and pieces, and building his own super machines. He enjoyed his fish aquariums, collecting and trading fish as a hobby. He enjoyed sci-fi movies, the Marvel Cinematic Universe being his most recent passion to enjoy watching with Stephanie. He also enjoyed fishing and hanging out with his Dad before he passed away. His treasured daughters captured his primary focus. He loved hearing about their lives and adventures and spending time with them. Ken is preceded in death by his father, Lonzo Duane Martin; his brother, Paul Duane Martin; his paternal grandmother, Vonda Martin; his paternal great-grandparents (who raised Lonzo), Oscar Paul Martin and Daisy “Rae” Martin; and maternal great-grandparents, Ethel Elizabeth (Best) Green and Claude Harley Lusher; as well as aunts, uncles and cousins. He is survived by his three daughters, Cari Sue Martin, Stephanie Kay Martin and Hannah Lillith Martin Elliot; a grandson, Brandon Lee Martin; his mother, Nancy Sue (Lusher) Martin; a brother, Lonnie (Mary) Martin; and two nieces, Krystal and Sierra. Memorial arrangements for Kenneth Dale Martin will be as follows: The family will receive friends on Thursday, February 4, 2021 from 5:00 to 7:00 PM at Crossroads Church, 900 NW Jefferson St., Grain Valley, MO 64029.  A memorial service will follow the visitation at 7:00 PM at the church. For our friends unable to attend in person, the funeral service will be made available by Livestream through the Crossroads Church YouTube channel: https://www.youtube.com/c/crossroadschurchgv/. In lieu of flowers, donations may be made to the spread of the Gospel through the mission work of his daughter, Stephanie Kay Martin in Cote d’Ivoire, Africa. Checks can be made out to Crossroads Church, PO BOX 351, Grain Valley, MO 64029 with “Mission Fund” in the memo OR memorial gifts can be digitally given to the Missions Fund here: https://direction4living.com/give/. Arrangements/Cremation facilitated by Hoefer Funeral Home Inc. Higginsville, MO 64037

Kenneth Dale Martin entered into the presence of Jesus on Thursday, January 21, 2021, at his home in Odessa, MO. He was 55 years old. Ken was born on May 4, 1965, at Richards-Gebaur Air Force Base in Belton, MO. He is the second of three children.... View Obituary & Service Information

The family of Kenneth Martin created this Life Tributes page to make it easy to share your memories.

Kenneth Dale Martin entered into the presence of Jesus on Thursday,...

Send flowers to the Martin family.