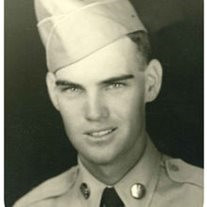 Kenneth Leroy Mendenhall, 88 of Richmond, MO, formerly of Corder, MO passed away Tuesday, May 9, 2017 at Sherkey Nursing Home in Richmond, Missouri after a long illness. Kenneth was born March 5, 1929 to George D. and Arlie (Hollis) Mendenhall. Times were hard and they became even harder when, at the age of 4, his mother died. He was farmed out to family members to raise him until he was old enough to work for his room and board and school clothes; many of those experiences had lasting effects on him until a man by the of Frank Ruehter took him to his farm. Mr. Ruehter not only taught him to be a farmer, but also how to be a man. When he became that man, running big equipment took his fancy. In 1950 his life took a complete 360. He married the love of his life, Betty Peacock, on August 20, 1950, and found a 'dream job' being a fireman on the railroad. Then, another bump in the road of life; the draft board said he had to go. After the Korean conflict he came home to find his job was no longer needed, the government did away with firemen. His next big adventure came with the KCT Elevator as Weigh Master, but the big 18-wheelers rolling in and out lured him to own one. So, for 30 years he was part of Hunt & Sons Truck Line. Carol Hunt was not only his boss, also his best friend. There was not a day they didn't talk on the phone, or in person. Kenneth retired from trucking in 1989 and returned to farming. Everything Mr. Frank taught him was there; even though times had changed, the basics were the same. All Kenneth ever wanted was a loving home and family; God gave him both; 3 daughters to spoil him and a son to carry on his name. He leaves behind his wife of 66 years (Betty), of the home, two daughters, Mary (Sean) Vaughan of Mountain Home, AR and Marsha Mendenhall (Mike) Markham of Ft. Lupton, CO. God took Kenneth Eugene Mendenhall to be with Him in 1992 and took Margo (Merg) Stotts in 2014. Margo leaves behind her devoted husband, Bob. Also preceded in death was one brother, Russell Mendenhall and one sister, Frances Sheridan. Kenneth took great pride in his twin grandsons, David & Jerrod Vaughan, calling them his Main Men, granddaughters Shalaine Vaughan, Autumn and Ashton Stotts, grandson, Kenneth Luke Mendenhall from Colorado, 8 great grandchildren and one great great grandchild. He leaves us with his famous saying, "Be nice and everybody will like you". It is said Kenneth never had an enemy, he was the salt of the earth. A funeral service will be held at 11:00 AM on Saturday, May 13, 2017 at Corder Baptist Church with the Rev. Ron Gross officiating, Lois Lindenmeyer, pianist and Jason Blystone & Jean Gerkin, vocalists. Interment will be in Calvary Cemetery, Corder, MO. The family will receive friends one hour prior to the service. Memorial contributions may be sent to Corder Baptist Church. Pallbearers are David Vaughan, Jerrod Vaughan, Mike Markham, Sean Vaughan, Trenton Vaughan and Kenneth Vaughan. Online condolences may be made to the family at www.hoeferfuneralhome.com

The family of Kenneth Mendenhall created this Life Tributes page to make it easy to share your memories.

Send flowers to the Mendenhall family.