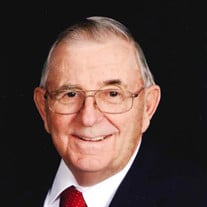 Kenneth William Schemmer, 90 of Higginsville, Missouri passed away on Friday, November 5, 2021, at Meyer Care Center. He was born Tuesday, October 13, 1931 in Mayview, Missouri, and was the son of the late William Schemmer and the late Mary (Starkebaum) Schemmer. He was a graduate of the Concordia High School-Class of 1949. After high school, he farmed crops, cattle, and hogs with his father. He enlisted in the United States Army in 1952 during the Korean War. Kenneth was in the 31st Field Artillery, 7th Division, and worked in the Fire Direction Center. Kenneth married Grace (Riekhof) Schemmer on January 30, 1955 and from this union they had two children. They spent 62 wonderful years together until her passing on December 16, 2017. Kenneth spent his career working as a farmer. He served on the Higginsville Special Road District from 1998-2013, and he spent 12 years on the board of the Higginsville Housing Authority from 2001-2013. Kenneth was a lifetime member of the VFW post 6270 and served as commander from 1979-1980. He was a member of the Higginsville American Legion Post 223. He was on the Lafayette County ASC Committee from 1982-1991, spent many years as a delegate for the MFA Oil Company, and was a lifetime member of the Lafayette County Pork Producers. In 1974, his family was selected as Lafayette County Farm Family of the Year. Kenneth was a member of the Salem United Church of Christ in Higginsville. He served on the church council, was active in many church organizations, and served on the Board of Elders. Kenneth served his community wholeheartedly, cherished his friends, loved his family, and he will be sorely missed by all who came to know him. Surviving are one son, Kevin (Beth) Schemmer of Higginsville; one daughter, Diane (Charles) Dudley of Higginsville; five grandchildren, Kyle Schemmer, Wesley (Hannah) Schemmer, Haley (Tim) Jordan, Ryan Dudley, Ross Dudley; three great-grandchildren, Kason Schemmer, Preston Schemmer, and Cameron Schemmer. He was preceded in death by his parents; his wife, Grace; and one brother, Norman Schemmer. The family will receive friends from 10:00 AM to 11:00 AM on Monday, November 15, 2021, at Salem United Church of Christ. A funeral service will follow at 11:00 AM at the church with Rev. Dr. Tommy Faris officiating. Interment will follow in the Salem Cemetery. Casket Bearers: Kyle Schemmer, Ryan Dudley, Wesley Schemmer, Ross Dudley, Haley Jordan, Tim Jordan. Memorial contributions may be made out to Salem U.C.C. Online condolences may be made to the family at www.hoeferfuneralhome.com

Kenneth William Schemmer, 90 of Higginsville, Missouri passed away on Friday, November 5, 2021, at Meyer Care Center. He was born Tuesday, October 13, 1931 in Mayview, Missouri, and was the son of the late William Schemmer and the late Mary... View Obituary & Service Information

The family of Kenneth William Schemmer created this Life Tributes page to make it easy to share your memories.

Send flowers to the Schemmer family.