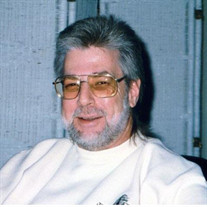 Larkin Dowden, 67 of Independence, Missouri passed away on Thursday, August 20, 2020, at the Independence Manor Care Center. Born Thursday, July 23, 1953 in Shreveport, Louisiana, he was the son of the late John Dowden and Billie Sue Dowden (Stump). He was the husband of the late Kathleen Dowden (Drake). They were married 22 wonderful years. She preceded him in death November 6, 2019. Larkin graduated from Fair Park High School in Shreveport, class of 1971. He joined the United States Navy in 1972, and proudly served his country while being stationed in Japan, California, and Maine until 1976. After his service Larkin worked for the Kansas City Southern Railway - Billing Department, retiring in 2018. Larkin's true passions in life were music and playing the guitar. In his younger years he did some traveling with his band, The Country Young-ins playing his pedal steel guitar. Larkin also enjoyed playing music for his church, First Baptist Church of Independence. He loved building and rebuilding computers. He even helped his father advance into the digital age. Larkin loved his family dearly. He and Kathleen were inseparable. He was a loving husband, doting grandfather, and will be truly missed by all who had the privilege to call him friend. Surviving are his mother, Billie Sue Dowden; one sister, Susan (Guy) Modica of Baton Rouge, LA; one step-son, Ryan Harvey of Grain Valley, MO; two step-daughters, Shelly (Tom) Ramsey of Richardson, TX, Jamie (Matt) Ronan of Kansas City, MO; and five step-grandchildren. He was preceded in death by his father, John Dowden; his wife, Kathleen Dowden; and one son, Matthew Dowden. A graveside service with military honors will be held at the Missouri Veterans Cemetery on Monday, August 24, 2020 at 10:00 AM. Services are open to the public but masks are mandated and social distancing needs to be followed.

Larkin Dowden, 67 of Independence, Missouri passed away on Thursday, August 20, 2020, at the Independence Manor Care Center. Born Thursday, July 23, 1953 in Shreveport, Louisiana, he was the son of the late John Dowden and Billie Sue Dowden... View Obituary & Service Information

The family of Larkin Dowden created this Life Tributes page to make it easy to share your memories.

Larkin Dowden, 67 of Independence, Missouri passed away on Thursday,...

Send flowers to the Dowden family.