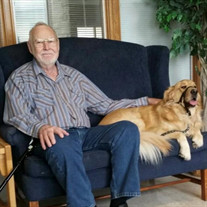 Master Sergeant, Larry Albert Lombard, 81 of Higginsville, Missouri, peacefully passed away on Monday, October 26, 2020, surrounded by loved ones at his granddaughter’s home. He was born August 31, 1939 in Garnett, Kansas, the youngest son of Earl and Esther (Tippin) Lombard. After meeting the love of his life during his senior year of high school in Lane, Kansas, Larry graduated from Lane High School in 1957. He enlisted to serve his country in the United States Air Force a few years later and was deployed to Korea immediately following basic training in 1959. Upon his return to the US on January 27, 1962, Larry married, Dee (Reeve) Lombard during a small ceremony in Georgia. Their life together of nearly 59 years was full of laughter, many weekends at the family rock quarry, and adventures traveling domestically and internationally. During the first fifteen years of his career, Larry was stationed in Korea, Georgia, Maine, Oklahoma, Vietnam, and Germany. In 1974, he was stationed at Whiteman Air Force Base (WAFB) until his retirement from active duty. He continued to serve his country through civil service at WAFB for an additional fifteen years. He and his family lived in Warrensburg, MO for more than 30 years. During that time, he continued his education and graduated with a Bachelor of Science in Industrial Arts and Technology from Central Missouri State University in 1981. Following his second retirement, Larry enjoyed driving a school bus for Warrensburg School District for six years until he retired fully in 2002. After relocating to Higginsville in 2004, Larry joined the American Legion, VFW, and Lions Club where he was an active member for many years serving his community. He was also a Freemason. Larry was known for always being kind, going the extra mile to help others, and being an incredibly loving man who prioritized family until his final breath. He always brought his ornery humor everywhere he went, a side effect of being the youngest child by thirteen years and growing up surrounded by a large extended family. To say Larry was a jack of all trades is an understatement. During his youth he spent time helping his father with their plumbing business, learned to fly airplanes with his dad and rode a unicycle “uphill both ways”. In his spare time, he loved to build whatever his brilliant brain dreamed up in his workshop, listen to classic country like Johnny Cash and the Highwaymen, and read Louis L'Amour books. Larry loved spending time with his family, especially his grandchildren and great grandchildren. He will be remembered by many at the Missouri Veterans Home in Warrensburg where he lived for the past four years. In addition to his parents, Larry is preceded in death by his brothers, Jack Lombard and Bob Lombard; sisters, Leona Foster and Earlene Kincheloe; brother-in-law, Jimmie Dale Reeve; brother and sister-in-law, Bill and Dianne Reeve, and sister-in-law, Helen Reeve. Larry’s legacy of kindness, humor, and adventure will live on through his wife, Dee Lombard of the home; two daughters, Robin (John) Koenig of Higginsville, Kelly (Larry) Johnisee of Jacksonville, IL; four grandchildren, Daniel (Andrla) Teter of Higginsville, Aren Koenig of Higginsville, Brenton Johnisee and fiancé Jessica of Jacksonville, Conar Johnisee of Jacksonville; three great-grandchildren, Benjamin Teter, Wesley Teter and Liam Johnisee; Sister-in-law, Rosalie Lombard of Emporia, KS and many loving nieces and nephews. After a life well lived and well-traveled, MSgt. Larry Lombard will be celebrated by family and friends at Salem United Church of Christ in Higginsville, at 3:00 PM on Friday, October 30, 2020. A visitation will be held one hour prior. Masks and social distancing are highly encouraged. Burial with full military honors will take place at a later date at the Missouri Veterans Cemetery. Casket bearers: Brenton Johnisee, Conar Johnisee, Larry Johnisee, Aren Koenig, John Koenig, Daniel Teter. Memorials may be made to the Veterans Home of Warrensburg.

Master Sergeant, Larry Albert Lombard, 81 of Higginsville, Missouri, peacefully passed away on Monday, October 26, 2020, surrounded by loved ones at his granddaughter&#8217;s home. He was born August 31, 1939 in Garnett, Kansas, the youngest... View Obituary & Service Information

The family of Larry Lombard created this Life Tributes page to make it easy to share your memories.

Send flowers to the Lombard family.