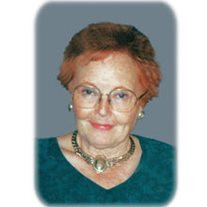 Louise S. Echelmeier (nee Ruth Louise Sanders) was born in a salt box farm house in rural Higginsville, Missouri on a cold February 25th, 1931, and was immediately put into hot blankets warmed on a wood stove. Her parents were Virgil and Ruth (nee Borgstadt) Sanders. Louise showed very early artistic talents making a dolls dress out of a rectangular star-and-stripe piece of cloth (a flag), which propelled her immediately into controversy from her mother's point of view. Louise's siblings were Robert and her younger brother Ronald Sanders and her older brother Robert. Robert preceded her in death, sadly, in 2009. She loved them both. In high school she played bass drum, worked in the office for the principal, and met her future husband, Herbert William Echelmeier. They were wed in June of 1951, followed by Herb serving in Korea, after which they created a family. Their children are Sharon, Susan, Steven and Stanton. Louise's formal education originally began in a one-room schoolhouse, Hazel Dell (south of Higginsville) (1937-1945), followed by Higginsville High School (class of 1949), Central Missouri State College (major in business, minor in art, a teaching certificate and a BS Degree (Bachelor of Science in Education) and Continuing Education Fine Arts credits from Central Methodist College (Fayette), Central Missouri State University, and St. Paul's College (Concordia). Artistic mediums she studied and became adept at besides sewing included oil painting, drawing, pottery and ceramics including raku, and in her later years hooking (rug hooking), the latter of which brought full circle a lifelong interest in the fabric arts. Needless to say, her life was punctuated by hundreds of trips to art and history museums far and wide including the Louve, the Metropolitan Museum of Art in New York, and the Hirshorn in Washington D.C., the latter shortly after it opened in the 1970s. Besides the high school principal's office Louise was employed in the Lake City Proving Ground, the Aberdeen Proving Ground (Maryland) and spent over 40 years doing bookkeeping in the family businesses including Echelmeier Auto Parts and Boonville Auto Supply. Life with husband Herb was a pairing of creative and constantly improvising minds, and besides children they collaborated in business, family finances, houses (and boats) at the Lake of the Ozarks, and trips in the US, Europe and Mexico (the latter developing into annual treks from 1978 through 2009). Louise had a large view of the world and besides traveling was proud to be an AFS (foreign exchange student) member and AFS host of Beat Abeggelen in 1981-82. She also worked - - with Salem Church and her friends the Siegfrieds- - to established a Laotian refugee family into the Higginsville Community in the late 1970s. Louise was also intimately involved in the Beta Sigma Phi effort to move the Confederate Chapel to it's present location by the cemetery, creating many of the graphics and posters used in the numerous fundraising activities. Having grandchildren eventually became a major avocation with Alexandra, Austin, Marie, Reid and Benjamin, arriving in that order. Clothes were made for the granddaughters, including smocked dresses, and the boys became the apples of her eyes. Awards included the American Mother's Art Competition (1983), for an oil painting of the Higginsville Depot (exhibited at the Waldorf-Astoria in New York), a Quails Unlimited Arts Show, a United Church of Christ Stewardship Project Poster Competition (first place, 1962), and last but not least, the American Legion School Award and Medallion in high school (1949). Louise passed away peacefully October 6, 1914 at the age of 83 at Meyer Care Center, the light of her vibrant personality having been dimmed gradually by Alzheimer's for several years. She will be greatly missed by family, relatives and friends, the bridge club, the sorority and many in Higginsville who knew and respected her over the years. Sadly this obituary can only begin to describe a complex, creative woman with a warm and humorous personality, who was devoted to her family, worked hard and still managed to be prolific with the gifts God gave her... to also share her artistic vision with the world. The visitation, Friday October 10, 2014 6:30 - 8:00 P.M. at Salem United Church of Christ. Funeral service on Saturday October 11, 2014 at 10:30 A.M. at the church. Interment will be in Higginsville City Cemetery. The family requests any memorials may be made out to the Crossroads Hospice, Salem United Church of Christ in Higginsville, or to the Alzheimer's Association. Pallbearers are Austin Echelmeier, Reid Echelmeier, Benjamin Echelmeier, Bill Borgstadt, Jim Borgstadt, and Larry Smith.

Louise S. Echelmeier (nee Ruth Louise Sanders) was born in a salt box farm house in rural Higginsville, Missouri on a cold February 25th, 1931, and was immediately put into hot blankets warmed on a wood stove. Her parents were Virgil and Ruth... View Obituary & Service Information

The family of Louise Sanders Echelmeier created this Life Tributes page to make it easy to share your memories.

Send flowers to the Echelmeier family.