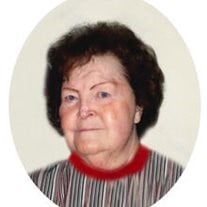 Lucille "Lucy" Branson, 81, of Higginsville, Missouri died on Tuesday, October 6, 2015, at St. Luke's Hospital in Kansas City, Missouri. Born Friday, March 2, 1934 in Dover, Missouri, she was the daughter of the late Robert Glenn Calvert and the late Lily Pauline (Davis) Calvert. She married Glen W. Branson on April 26, 1957; he preceded her in death on November 2, 2008. Mrs. Branson received a BS in Business Administration from CMSU in 1955. She was an executive assistant for Employers Reinsurance Corporation, retiring in 1989. She returned to Higginsville in 1997, moving from LaCynge, Kansas. She was a member of the Higginsville Central Christian Church and a former member of GFWC Higginsville Women's Club, the Prairie Homemakers Club and Alpha Gamma Delta sorority. Surviving are one son, Russel E. Branson of Kansas City, MO; one brother, Bob (Linda) Calvert of LaCynge KS; one sister Debbie (Tommy) Mapp of Sebring, Fl.; and one granddaughter Kelly Lyn Branson. A funeral service will be at 10:30 A.M. on Monday, October 12, 2015 at Central Christian Church located at 16 W. 20th St. Higginsville, Missouri 64037 with the Rev. Terry Cook officiating. Interment will be in City Cemetery, Higginsville, MO. The family will receive friends from 9:30 A.M. to 10:30 A.M. on Monday, October 12, 2015, at the church. Memorial contributions may be sent to Central Christian Church. Casketbearers are David Bain, Carl Branson, Richard Branson, Gregg Kirchhoff and Ken Branson. Online condolences may be made to the family at www.hoeferfuneralhome.com

The family of Lucille "Lucy" Branson created this Life Tributes page to make it easy to share your memories.

Send flowers to the Branson family.