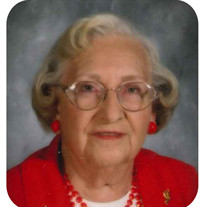 Lucille Jeanette Goetz, 94 of Higginsville, Missouri died on Saturday, September 29, 2018, at Meyer Care Center in Higginsville, Missouri. Born Monday, January 21, 1924 in Corder, Missouri, she was the daughter of the late Walter Fahrmeier and the late Lucy Slusher Fahrmeier. She married Raymond Goetz on March 15, 1942 and he preceded her in death May 16, 1979. She was a graduate of Higginsville High School class of 1941. She was a loan officer for the Warrensburg Production Association, retiring in 1986. She was a member of Central Christian Church and held many positions with the church. She taught pre-school, Sunday school and was known to most as Grandma Lou. She sang in the choir. Throughout her retirement she served and volunteered for many organizations and associations. Surviving are three daughters all of Higginsville, Patricia (Louis) Lashure, Sherry (Larry) Heaper, and Leonna (Michael) Hoefer; six grandchildren; Doug Brockert, Amy Heaper, David Heaper, Jeremy Hoefer, Melissa Bratton, Lorrie Piercy; three great grandchildren; three great-great grand children. She was preceded in death by her husband; her parents; two brothers, Melvin Fahrmeier and Eugene Fahrmeier; three grandchildren; one great grandchild. A funeral service will be held at 10:00 AM on Tuesday, October 2, 2018 at Central Christian Church with Pastor Alan Lumkins officiating and Cheryl Sanders assisting. Interment will be in the City Cemetery. The family will receive friends from 6:00 PM to 8:00 PM on Monday, October 1, 2018, at the Central Christian Church. Memorial contributions may be sent to Central Christian Church or the Lafayette County Cancer Coalition.

The family of Lucille J. Goetz created this Life Tributes page to make it easy to share your memories.

Send flowers to the Goetz family.