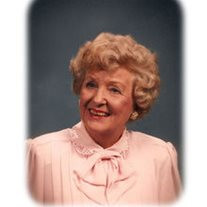 Marcia McCuistion Zerbst, age 97 of Ft. Lauderdale, Florida died on Wednesday, February 5, 2014, at Somerford Place Nursing Home in Annapolis, Maryland. Born Sunday, February 27, 1916 in Corder, Missouri, she was the daughter of the late Louis Smith and the late Olga Smith. She married the late Kenneth W. McCuistion and later married the late Charles A. Zerbst. Also preceding her in death are one brother, Elston K. Smith and one sister, Hazeleigh Smith. Born and raised in Corder, she led an idyllic American childhood. On the adventurous side, she moved to Kansas City where she married Ken before WW2. They moved to Ft. Laurderdale in the late 1950's and made it their home. Ken passed away in 1976 and she married Chuck, a widower, in 1981. They continued their journey through life for another 32 years until Chuck's passing in April 2013. Then she moved to Maryland to be closer to her son, daughter-in-law and grandchildren. She passed peacefully in her sleep in the early morning hours of February 5, 2014. She lived a long and fulfilling life. She loved spending time with friends and neighbors, but family always was the center of her life. She always had a kind word, helping hand, and a smile for all she met. She has seen a lot and done a lot in her life, and was always the consummate lady. Surviving are one son, Doug (Joan) McCuistion of Dunkirk, Maryland; two grandchildren, Kenneth McCuistion and Meghan McCuistion She is also survived by devoted nieces Dianna Wheeler and Laurie Orr and their families, as well as Nancy Carter and family, niece-by-marriage. A Funeral service will be at 10:30 A.M. on Friday, February 14, 2014 at Hoefer Chapel, 1600 Main St. Higginsville, Missouri with Pastor Brett Mueller officiating. Interment will be in Zion Lutheran Cemetery, Corder. The family suggests Memorials to Zion Lutheran Cemetery. Online condolences may be made to the family at www.hoeferfuneralhome.com

The family of Marcia McCuistion Zerbst created this Life Tributes page to make it easy to share your memories.

Send flowers to the Zerbst family.