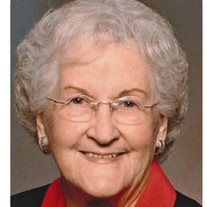 Marcile G. Fischer, 83 of Corder, Missouri died on Tuesday, September 13, 2016, at the Lutheran Nursing Home in Concordia, Missouri. Born Friday, September 30, 1932 in Hodge, Missouri, she was the daughter of the late Daniel Shockley and the late Elenora Franklin Shockley. She married Donald N. Fischer on December 16, 1950 and he preceded her in death on February 28, 2009. She lived most of her life in Corder, Mo. She was a member of Corder United Methodist Church and a member of the Lafayette County Farm Bureau. Surviving are one daughter, Debbie (Chris) Good of Corder, MO; three brothers, Daniel Shockley of Orrick, MO, Charles (Adruth) Shockley of Orrick, MO and Lloyd (Paulette) Shockley of Missouri City, MO; five grandchildren, Justin (Amanda) Good, Christa (Scott) Bell, Steven Fischer, Kevin (Elizabeth) Fischer, and Don Fischer; and five great grandchildren. She was preceded in death by her parents, her husband, Donald N. Fischer, her son, Gary W. Fischer, and one brother, John Shockley. A funeral service will be held at 10:30 AM on Monday at the Corder United Methodist Church with Pastor Ralph Varner officiating, Delaney Upton as pianist. Interment will be in Calvary Cemetery, Corder, MO. The family will receive friends from 9:30 AM to 10:30 AM Monday, at the church. Memorial contributions can be made to the Donald and Marcile Fischer Memorial Agriculture Scholarship Fund. Casket bearers are Steven Fischer, Kevin Fischer, Don Fischer, Justin Good, Scott Bell and Jeff Schmidt. Online condolences may be made to the family at www.hoeferfuneralhome.com

Marcile G. Fischer, 83 of Corder, Missouri died on Tuesday, September 13, 2016, at the Lutheran Nursing Home in Concordia, Missouri. Born Friday, September 30, 1932 in Hodge, Missouri, she was the daughter of the late Daniel Shockley and the... View Obituary & Service Information

The family of Marcile G. Fischer created this Life Tributes page to make it easy to share your memories.

Send flowers to the Fischer family.