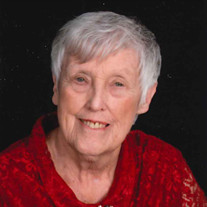 Marilyn Sue (Norris) Yocum, died Monday, December 2, 2019 at her home in Higginsville, surrounded by her children, grandchildren, and her dog, Baby Joe. Funeral arrangements have been entrusted to Hoefer Funeral Home Inc. and online condolences may be made to the family at www.hoeferfuneralhome.com A visitation will be held at Hoefer Funeral Home in Higginsville, MO on Saturday, December 7, from 6:00 to 8:00 p.m. The funeral service will be held at Grace United Methodist Church, Sunday, December 8 at 1:00 p.m. with interment following in the Higginsville City Cemetery. Marilyn is survived by her daughter Melissa S. Yocum and granddaughter Mattea of the home; daughter Dr. Christina Venner (husband Dan) and granddaughters Emily and Grace of Liberty, MO; son John E. Yocum III (wife Kendra) and grandchildren Haley, Melissa M., John E. IV, and Layla of Independence, MO; brother John C. Norris (Glenda) of Sun City West, AZ; brother-in-law Donald P. Yocum (Bonna) of Grain Valley, MO; and nineteen nephews and nieces. Marilyn was preceded in death by her husband of 47 years, Rev. John E. Yocum II. They were married on July 11, 1959 in Atchison, KS. Marilyn served as a Methodist pastor’s wife in the communities of Orrick, Chillicothe, Waverly, and Higginsville, MO. Born in Nevada, MO to Clifford and Martha (Heidenreich) Norris on May 1, 1935, Marilyn attended Cottey College in Nevada, MO and earned her Bachelor of Arts from Pittsburg State University in KS. She later obtained her Master’s and multiple Specialist degrees in education from Central Missouri State University in Warrensburg. Marilyn’s career as a teacher began when she was 20 in Atchison, KS and lasted more than 50 years. In her early years she also taught at Warrensburg, MO and Rock Springs, WY. Marilyn spent the majority of her career - over 28 years - teaching in the Fort Osage School District. After retiring from public education, she served as an educational and psychological evaluator at the Waverly Division of Youth Services until the age of 70. Marilyn valued her role as a lifelong educator and worked with children as a CASA volunteer advocate, youth group leader, Sunday school teacher, and piano instructor. She regularly participated in projects to provide food and clothing to children in need. Marilyn was instrumental in organizing the Higginsville Grief Group, and was an active member of P.E.O. Chapter EK, the Lafayette-Lexington Chapter of DAR, Grace United Methodist UMW, and the Red Hat Society. Marilyn cared deeply about social justice issues and equal rights for all. She believed her time on earth should be spent in service to others and made the most of using her voice to advocate for those who too often go unheard. Because Marilyn focused on the plight of children in need, we suggest memorials to UMCOR #3021566 (United Methodist Committee on Relief / Indigenous Women’s Vegetable Gardening and Leadership Program in Guatemala) and CASA (Court Appointed Special Advocates) for children who have experienced neglect. Donations may be directed to Hoefer Funeral Home, 1600 N. Main, Higginsville, MO 64037.

The family of Marilyn Sue Yocum created this Life Tributes page to make it easy to share your memories.

Send flowers to the Yocum family.