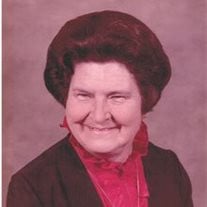 Mary Virginia Garrett, 94, of Higginsville, Missouri died on Saturday, February 25, 2012, at Meyer Care Center in Higginsville, Missouri. Born Saturday, July 7, 1917 in the community of Fayetteville, Missouri, she was the daughter of the late John Ludlam and Blanche Pollack Ludlam. Mrs. Garrett lived in Higginsville for 66 years. She graduated in 1939 from the Central Missouri State Teachers College in Warrensburg, MO. She worked as a store clerk in Lebanon, MO and was a school teacher at the Robbins Community Country School 3-4 years before becoming a homemaker. She was an active member of the First Baptist Church in Higginsville where she was the director of the 'Beginners' Sunday School class for nearly 50 years. She was also involved in many other organizations within the church. Mrs. Garrett was a Cub Scout leader and Den Mother. She married Arthur Monroe Garrett in Liberty, MO in June, 1941. He preceded her in death October 17, 1967. Also preceded in death are 3 brothers; Eddie Ludlam, Cleo Ludlam and Virgil Ludlam; and one sister, Mamie Payne. Surviving are sons, Charles Arthur (Peggy) Garrett of Higginsville, MO and James Monroe (Debbie) Garrett of Unionville, MO; 5 grandchildren; Kyle (Rachel) Garrett, Julie Garrett, Jennifer Garrett, Tracie Childers, and David Garrett; 7 great grand children; 2 beloved sisters-in-law, Mona Sagrue and Hazel Garrett; and many beloved nieces, nephews and their families. Pallbearers are Eddie Ludlam, Danny Ludlam, Ronnie Welhoff, David Garrett, Donald Garrett and Kenny Fidler. A funeral service will be at 2:00 PM on Wednesday, February 29, 2012 at the First Baptist Church in Higginsville, Missouri with Dr. Greg Fine officiating. Burial will be in the Liberty Cemetery, Warrensburg MO. The family will receive friends from 7:00 PM to 8:00 PM on Tuesday, February 28, 2012, at Hoefer Funeral Home, 1600 Main St., Higginsville, Missouri. Memorial contributions may be sent to First Baptist Church Higginsville, MO 64037. Online condolences may be made to the family at www.hoeferfuneralhome.com

The family of Mary Virginia Garrett created this Life Tributes page to make it easy to share your memories.

Send flowers to the Garrett family.