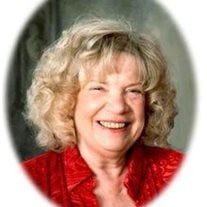 Mary M. (Wood) Hendon, age 67, of Corder, Missouri., died Friday, September 18, 2009, at Essex, Iowa. She was a member of Corder Baptist Church. She was also former President of the Lexington, Missouri GFWC, former President of the Lexington Garden Club, and a member of the the Corder Women's Club. She graduated from Wyondotte High School in Kansas City, Kansas in 1959 and received an Associate's degree in business from Wentworth College, Lexington, Missouri. She was born November 28, 1941 at Fort Leavenworth, Kansas, the daughter of the late John Henry Wood and the late Josephine (Roland) Wood. She worked as a secretary at a John Deere dealership in Kansas City, Missouri, retiring in 1976. She married Dariel W. Hendon March 23, 1959. He preceded her in death August 20, 2009. Also preceded in death is one brother John Henry Wood, Jr. She is survived by her two daughters, Josie Stephens and husband Vernon of Liberty, Missouri; Wendy Hendon and male companion Gene Graham of Essex, Iowa; one son, Daniel Hendon and wife Jenneane of Dunlap, Iowa; a grandson, raised as a son, Brandon Hendon of the home; one sister, Janet R.Martin and husband Dave of Bybee, Tennessee; one brother, Edward C. Wood and wife Rita of Anamosa, Iowa; eight grandchildren and one great-granddaughter. Arrangements are being handled by Hoefer Funeral Home, Inc. where the family will receive friends from 7:00 PM to 8:00 PM Tuesday, September 22, 2009. Funeral service will be at Corder Baptist Church at 10:00 AM Wednesday, September 23, 2009 , Rev. Ronald Gross officiating and Shirley Corder, pianist. Interment will be at Missouri Veterans Cemetery. The Family suggests Memorials to Corder Baptist Church.

The family of Mary M. Hendon created this Life Tributes page to make it easy to share your memories.

Send flowers to the Hendon family.