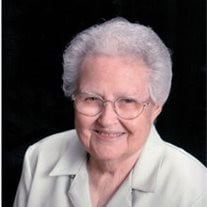 Maurine Stoll Cox was born in Richmond, MO to Willie Wesley Cox and Ethel Ann Bush on August 2, 1920. She was on the Cradle Roll of the First Baptist Church in Richmond, MO. At the age of 20, she accepted Christ in her life and was baptized. On February 14, 1956 she married Warren Benjamin Stoll. To this union they had a son, David, on December 29, 1956, who passed away at birth. At this point in her life she felt a call to re-dedicate her life. Warren and Maurine lived on the Stoll farm with Warren's father for two years. In March of 1958 she and Warren moved to Higginsville. Prior to marriage Maurine worked at the Ray County Collector's Office for five years. She then accepted a position at The Exchange Bank of Richmond where she worked for the next 13 years. She later worked for Ferrelgas in Higginsville for eight years before retiring. In 1960, Warren and Maurine adopted their oldest daughter, Susan, from the Missouri Baptist Children's Home located in St. Louis. In 1961, they returned to the Home to adopt Don and Linda, as well. Maurine and Warren were active in the First Baptist Church of Higginsville in Sunday School, Training Union, and WMU. Maurine was one of the dispersing officers for the church during the building of the new church. In his later years, Warren became a Deacon and together, they visited shut-ins and rendered services to whomever needed assistance. They both loved their church and church family and could not thank them enough for their kindness, love and support over the years. Maurine was preceded in death by her parents, three sisters, one brother and her husband Warren. She is survived by her daughter, Susan (Ernest) Johnson of Higginsville; her son Don (Pat) Pollard of Whittier, CA; and Linda Stoll of Higginsville. She is also survived by her grandchildren, Troy (Susan) Lefman of the home; Nichole Williams; Kimberly (Bruce) Cohoon; Amanda (Joe) Parra; and great-grandchildren, Miles and Myranda Lefman and Jameel and Jaden Merritt; nieces, Carol (Terry) Tegg, Jennifer Garrett, Lynn (Dwight) Snodgrass; Dana (Brian) Vossman; one sister-in-law, Shirley Stoll; and her extended family, Dianne Kimball; Gary and the late Diane Manning and family; and Kay Lawson. A Funeral Service will be held 10:30 a.m. Wednesday, October 19, 2011 at the First Baptist Church, 1907 Peach St. Higginsville with Dr. Greg Fine officiating, Thelma Dye as organist and Patricia Holtcamp as vocalist. Burial will be at Machpelah Cemetery, Lexington, MO. Friends may call one hour prior to the service on Wednesday at the Church. In lieu of flowers, the Family suggests Memorials to the First Baptist Church Building Fund. Casketbearers are Deacons of the church. Arrangements: Hoefer Funeral Home, Inc. Online condolences may be made at www.hoeferfuneralhome.com

Maurine Stoll Cox was born in Richmond, MO to Willie Wesley Cox and Ethel Ann Bush on August 2, 1920. She was on the Cradle Roll of the First Baptist Church in Richmond, MO. At the age of 20, she accepted Christ in her life and was baptized.... View Obituary & Service Information

The family of Maurine Cox Stoll created this Life Tributes page to make it easy to share your memories.

Send flowers to the Stoll family.