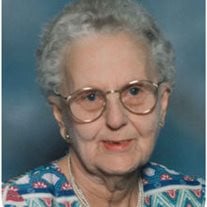 Mildred A. Heyer, 94 of Higginsville, Missouri died on Friday, August 26, 2016, at Lafayette Regional Health Center in Lexington, Missouri. Born Tuesday, December 6, 1921 in Corder, Missouri, she was the daughter of the late Martin Schnakenberg and the late Lula Aversman Schnakenberg. She was baptized and confirmed at Zion Lutheran Church in Corder, MO. Mildred lived most of her life in Higginsville. She married Chris Heyer, Jr. on April 21, 1946. She worked at the International Shoe Factory for 5 years and later as a meat wrapper at Buck's Market for 20 years until she retired in 1981. She was a member of Immanuel Lutheran Church in Higginsville. She later transferred to St. Paul's Lutheran Church in Independence, MO. Surviving are one son, Ronald (Wanda) Heyer of Independence, MO; two daughters, Vickie (Charles) Stuedle of Quincy, IL and Beverly Pate of Des Moines, IA; seven grandchildren, Carmela Taylor-Johnson, Staci Noel, Darynda Spencer, Courtney Saxton, Rodney Heyer, Travis Pate, Jonathan Heyer and nineteen great grandchildren. She is preceded in death by her parents, her husband Chris Heyer Jr. and her sister, Ruth Harms. A funeral service will be held at 11:00 AM on Tuesday at Immanuel Lutheran Church with the Pastor Marcus Jauss officiating and Pastor Gary D. Stolle assisting and Marilyn Boeschen, organist.. Interment will be in City Cemetery, Higginsville, MO. The family will receive friends from 10:00 AM to 11:00 AM on Tuesday, August 30, 2016, at Immanuel Lutheran Church. Memorial contributions may be sent to Immanuel Lutheran Church or St. Paul's Lutheran Church - Independence. Casket bearers are Jonathan Heyer, Rodney Heyer, Travis Pate, Daniel Spencer, Donnie Schnakenberg and Ronnie Schnakenberg. Online condolences may be made to the family at www.hoeferfuneralhome.com

The family of Mildred A. Heyer created this Life Tributes page to make it easy to share your memories.

Mildred A. Heyer, 94 of Higginsville, Missouri died on Friday,...

Send flowers to the Heyer family.