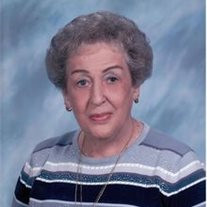 Nadine M. Fiene, age 86 of Higginsville, Missouri died on Saturday, February 4, 2012, at Meyer Care Center in Higginsville, Missouri. Born Thursday, August 13, 1925 in Mack's Creek, Missouri, she was the daughter of the late Columbus D. Meads and the late Isoline (Seaton) Meads. She married Roy Fiene December 16, 1946. He preceded her in death January 31, 2000. Also preceded in death are four brothers, Dorsey, Aubrey, Leonard and Guy Meads; and two sisters, Oma Price and Ona Seale.. She was a member of Salem United Church of Christ in Higginsville. Nadine was a homemaker and lived in Anaheim, California from 1947 until 1981 when she moved back to Higginsville. Surviving are son, Darrell C. Fiene of Marietta, California; daughter, Victoria D. Fiene of Patterson, California; 5 grand children; 1 great grand child. A Funeral service will be held at 2:00 P.M. on Thursday, February 9, 2012 at Hoefer Funeral Home Chapel, 1600 Main St. Higginsville, with the Rev. Joyce Holley officiating. Interment will be in Higginsville City Cemetery, The family will receive friends from 1:00 P.M. to 2:00 P.M. on Thursday prior to the service. Pallbearers are Randy Fiene, Jeff Fiene, Don White, Dan Disberger, Tiger Fiene and Johnny Sinnett. Online condolences may be made to the family at www.hoeferfuneralhome.com

The family of Nadine M. Fiene created this Life Tributes page to make it easy to share your memories.

Send flowers to the Fiene family.