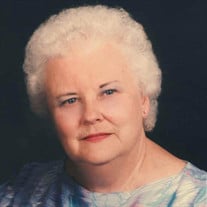 Norma Grace Baughman (Goacher), 89 of Higginsville, Missouri passed away on Tuesday, May 5, 2020, at Meyer Care Center in Higginsville. Born Wednesday, May 14, 1930 in Clarence, Missouri, she was the daughter of the late John Goacher and the late Martha Goacher (Edwards). Norma married Charles Baughman on January 7, 1951 and he preceded her in death on August 29, 2009. They were married 58 years. She graduated from Holden Missouri High School in 1948. Norma worked for Lake City Ammunition Plant for ten years before dedicating her life to raising her children and caring for her family. She was an active parent of the P.T.A., Booster Club, Boy Scouts, Cub Scouts, and Girl Scouts. Norma never missed a chance to be a part of her children's activities and passions. She enjoyed camping and spending time with her family. Norma volunteered her time with the Della Lamb Community Services in Kansas City, Missouri. She was a member of the Independence St. Paul United Methodist Church and enjoyed attending many church activities. Surviving are two sons, Tom (Lisa) Baughman of Raytown, Missouri, Jim (Kathy) Baughman of Sedalia, MO; one daughter, Terrie Jackson of Kansas City, MO; one brother, Jerry (Joyce) Geacher of Sarasota, FL; nine grandchildren; eleven great-grandchildren. She was preceded in death by her parents and her husband, Charles Baughman. A private funeral service will be held with interment following in the Veterans Cemetery. The family will hold a celebration of Norma's life at a later date where an event may be open to all friends and the full public. Memorials may be made out to the American Cancer Association and mailed to Hoefer Funeral Home 1600 Main St. Higginsville, MO 64037.

Norma Grace Baughman (Goacher), 89 of Higginsville, Missouri passed away on Tuesday, May 5, 2020, at Meyer Care Center in Higginsville. Born Wednesday, May 14, 1930 in Clarence, Missouri, she was the daughter of the late John Goacher and the... View Obituary & Service Information

The family of Norma Baughman created this Life Tributes page to make it easy to share your memories.

Send flowers to the Baughman family.