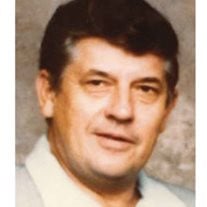 Orville W. Salyer, 84 of Concordia, Missouri died on Thursday, November 24, 2016, at Lafayette Regional Health Center in Lexington, Missouri. Born Tuesday, March 1, 1932 in Waverly, Missouri, he was the son of the late Oliver Salyer and the late Alvena Willard Salyer. He was a graduate of the Waverly High School, Class of 1950. He served as an aircraft mechanic assistant in the Navy from 1951 until 1955, during the Korean War. He married Mary Bonkoski on June 16, 1961 and she preceded him in death on January 5, 2011. He was an insulator and a life member of the Heat and Frost Insulators Union Local #27, retiring in 1989. He loved hunting, fishing, and was a former star softball pitcher. He was inducted into the Softball Hall of Fame at Sedalia, Mo. in 1984. He lived in Gladstone and Higginsville until moving to Concordia in 2015. Surviving are two sons, Douglas (Kendalle) Salyer of Platte City, MO and Donald (Peggy) Salyer of De Soto, KS; 2 grandchildren, Jacob Salyer and Chelsea Pletke and three great grandchildren. A funeral service will be held at 11:00 AM on Wednesday at the Hoefer Chapel. Interment will be in the Waverly Cemetery, The family will receive friends from 10:00 AM to 11:0 AM on Wednesday, November 30, 2016, at the funeral home. In lieu of flowers, the family request memorial contributions may be sent to Corder VFW Post 4288. Casket bearers are Bill Kloeppel, Paul Kloeppel, Jeff Kloeppel, Bobby Reed, Gary Bonkoski and Jeff Bonkoski. Online condolences may be made to the family at www.hoeferfuneralhome.com

Orville W. Salyer, 84 of Concordia, Missouri died on Thursday, November 24, 2016, at Lafayette Regional Health Center in Lexington, Missouri. Born Tuesday, March 1, 1932 in Waverly, Missouri, he was the son of the late Oliver Salyer and the... View Obituary & Service Information

The family of Orville W. Salyer created this Life Tributes page to make it easy to share your memories.

Send flowers to the Salyer family.