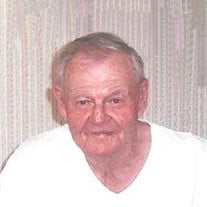 Otis L. Baker, age 81 of Higginsville, Missouri died on Wednesday, October 20, 2010, at Lafayette Regional Health Center in Lexington, Missouri. Born Wednesday, February 6, 1929 in Bardel, Louisiana, he was the son of the late William Casper Baker and the late Mary Francis Flynn. He married Daisy Arlene Harrell in 1955. She preceded him in death June 1, 2007. Also preceded in death is one brother, Percy Baker & two sisters, Helen Woods & Barbara Cofer. Otis worked as a heavy equipment operator, retiring in 1990. He lived in Wellington, Missouri 14 years, Hermitage, Missouri 16 years, moving to Higginsville in 2006. He was a member of Operating Engineers Local #101. Surviving are one son, Otis L. Baker II (Jennifer) of Wellington; sister, Sherry Terry of Batesville, Mississippi; & three grand children. A Funeral service will be at 2:00 P.M. Sunday, October 24, 2010 at Hoefer Chapel with the Minister Colbert Turney officiating. Interment will be in the City Cemetery, Higginsville. Online condolences may be made to the family at www.hoeferfuneralhome.com

The family of Otis L. Baker created this Life Tributes page to make it easy to share your memories.

Send flowers to the Baker family.