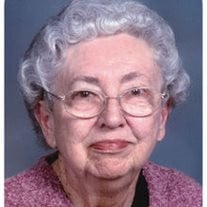 Ozelle Wagoner Knipmeyer Strength and honor are her clothing; She shall rejoice in time to come. Her children rise up and call her blessed. Ozelle Wagoner Knipmeyer, 96, of Higginsville, Missouri, went to be with her Lord surrounded by her loving family, April 18, 2018 at her home. Ozelle was born January 10, 1922 south of Odessa, Missouri to Earl and Helen (Barnett) Wagoner. She graduated from Odessa High School in 1939 and received a BS and MS from Central Missouri State University. Ozelle began her teaching career at Harris School, a one-room school near Wellington in 1941. In 1943 she moved to Higginsville, Missouri and taught math and general science in both junior and senior high as well as elementary for a total teaching career of 28 years. She was united in marriage to James Knipmeyer of Higginsville in 1947. He preceded her in death in 2001. She remained at their farm home until her death. James and Ozelle were parents of three daughters and one foster daughter who survive: Karen (Randy) Evans of Lake Dallas, TX; Susan Wiggs (the late Evan Wiggs) of Vancouver, WA; Eunice (Keith) Davis of Jefferson City, MO; and foster daughter, Carolyn Welch (the late Michael Welch) of Reardan, WA. Ozelle was grandmother to seven grandchildren and 14 great-grandchildren. She was preceded in death by her parents; one brother, R. Graham Wagoner; one sister, Carolyn B. Lewis. She was one of the first members of Faith Baptist Church, Higginsville; member of Missouri State Teacher's Association and Retired Teachers, Farm Bureau, and Extension. She was active in the Gideons Auxiliary. Ozelle was a faithful servant to her Lord, her family, church, and community. She was the pianist for Faith Baptist Church for over 30 years. She helped lead a local 4-H club and was Farm Bureau Woman of the Year. She loved gardening and cooking. She was well-known for her bread and pies. She had the gift of hospitality for family, friends, and visiting missionaries. Visitation will be Friday, April 27, 4 to 6 PM at Hoefer Funeral Home. A celebration of Ozelle's life will be held at Faith Baptist Church, 7430 S. Highway 13, Higginsville, MO on Saturday, April 28, 10:30 AM. Graveside service will follow with burial at Corder Calvary Cemetery. In lieu of flowers, memorials are suggested to Faith Baptist Mission Fund or Lafayette County Gideons.

The family of Ozelle Wagoner Knipmeyer created this Life Tributes page to make it easy to share your memories.

Strength and honor are her clothing;
She...

Send flowers to the Knipmeyer family.