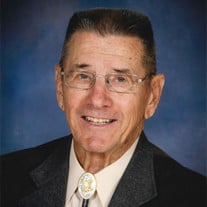 John "Pete" Dwane Beck, 84 of Higginsville, Missouri passed away on Saturday, March 7, 2020, at Meyer Care Center in Higginsville. He was born to John and Alma (Knox) Beck on February 7, 1936. Pete married Helen Elizabeth Martin on June 30, 1956. They were married 53 years. She preceded him in death on May 5, 2009. Pete attended Higginsville High School where he was student body president and yearbook editor. He played four years of football, becoming all-conference, all-district, and all-state. As an enthusiastic athlete, he also participated in basketball, track, and baseball. Pete graduated from Higginsville High School in 1954. He also earned the highest level of achievement in Boy Scouts by becoming an Eagle Scout. Pete received the University of Missouri athletic scholarship. He attended Central Missouri State University where he received a degree in Education and Physical Education receiving his Master's Degree in 1960. He moved to Fontana, California in 1960 to start his career as a History and Physical Education teacher while also coaching multiple sports including girls' softball. He later acquired a teaching job in Chico, California and became the head football coach in 1971. They went on to win the Northern Section Championship in 1981, 1982, 1987, and 1989; Runner-up in 1988, 1990, 1991, 1992, 1993; and Eastern Athletic Conference Champions 8 times. He retired from teaching and a glorious coaching career in 1993. Other athletic accolades include: inductee to the Higginsville Hall of Fame, Chico California Hall of Fame, Northern Section California Hall of Fame, and the Chico High Unified School District Athletic Hall of Fame. He acquired the longest tenure football coach at Chico High School at that time, with twenty-two years. He finished his coaching career with an impressive record of 153-70-6. The love of his life, Helen, was with him the entire journey only missing one game due to illness. Pete enjoyed dancing, coffee with friends, gardening, Mexican food and margaritas. He was an avid hunter and fisherman. He was a member of St. Mary's Catholic Church. Pete was an Elks Lodge member for 50 years in Chico, CA, and a Moose Lodge member in Sedalia for 5 years. He will be sorely missed by so many friends, family, students, and sports acquaintances. Surviving are one brother, Tom (Jan) Beck of Lexington, MO; good friend and dance partner, Margie Weller of Sedalia, MO; six nieces and nephews; fifteen great nieces and nephews; twelve great-great nieces and nephews. He was preceded in death by his parents; wife, Helen; one sister, Joyce (Beck) Kays; and one brother-in-law, Frank Kays. Recitation of the Holy Rosary will be held at 5:30 pm Wednesday, March 11, 2020 at Hoefer Funeral Home. A visitation will follow from 6:00-7:30 PM. Mass of Christian Burial will be held at 10:30 AM on Thursday, March 12, 2020 at St. Mary's Catholic Church with the Father Thomas Hawkins officiating. Rite of Committal will follow in the Higginsville City Cemetery. Pallbearers: Cody Beck, Greg Beck, Zach Beck, Drew Irvine, Lance Kays, Mark Kays. Honorary Pallbearers: Howard Goring, Russell Hughes, Ted Knox, Gilbert Rector. Memorial contributions may be sent to the American Heart Association or St. Jude Children's Hospital.

The family of Pete Beck created this Life Tributes page to make it easy to share your memories.