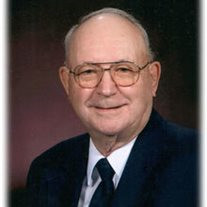 R. Eugene "Gene" Bottemuller, age 81 of Higginsville, Missouri died on Wednesday, February 12, 2014, at Centerpoint Medical Center in Independence, Missouri. Born Friday, April 29, 1932 in Odessa, Missouri, he was the son of the late Arthur Bottemuller and the late Vera (Krohm) Bottemuller. He and Barbara L. Schowengerdt were united in marriage on February 12, 1950. Gene owned and operated several businesses Higginsville, was employed by Safeway Grocery Store and then Bendix Aviation in Kansas City, Missouri. He then worked at Blackburn Building Supply. He retired in 1994 after working 25 years as Supervisor of the Concordia, Missouri Highway Maintenance Building for Missouri Department of Transportation. He lived most of his life in Higginsville and was a 1949 graduate of Higginsville High School. A member of Salem United Church of Christ, Gene served as past president of the Board of Elders at the church, a Sunday school teacher, President of the Husker Booster Club, and past Boy Scout Troop #415 scout leader. His hobbies included fishing, hunting and bowling. Preceding him in death are one brother, Arthur A. Bottemuller, Jr. and one sister, Kathleen Gieseke. Surviving are his wife, Barbara Bottemuller of the home in Higginsville; two sons, Bruce (Lisa) Bottemuller of Rio Rancho, New Mexico, Barry Bottemuller of Kansas City, Missouri; one daughter, Connie (Mark) Swigart of Sugar Creek, Missouri; 11 grandchildren and 14 great grandchildren. A Funeral service will be at 2:30 P.M. on Saturday, February 15, 2014 at Salem United Church of Christ, 1500 N. Main St. Higginsville with Rev. Dr. Tommy L. Faris officiating and Doris Jane Stoner as organist. Interment will be in the Higginsville City Cemetery. The family will receive friends from 1:30 to 2:30 P.M. on Saturday prior to the service at the church. The Family suggests Memorials to Shriner's Hospital, St. Louis, Missouri. Pallbearers are Micah Bottemuller, Dan Bottemuller, Garth Kueck, Sean Hipsh, Brian Wahn an Joel Bottemuller. Honorary pallbearers are Bob Stephenson, Bob Hayes, Dal Singh, Frankie Crawford, Jim Thaller, Bob Kindle, Gary Bauer, and Doug Wahn. Online condolences may be made to the family at www.hoeferfuneralhome.com

The family of R. Eugene "Gene" Bottemuller created this Life Tributes page to make it easy to share your memories.