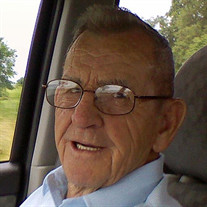 Raymond Eugene White, 94 of Warsaw, Missouri died on Friday, July 19, 2019, at the Golden Age Living Center in Stover, Missouri. He was born Sunday, September 21, 1924 in Sedalia, Missouri to the late Arther White and the late Leora (Gaylord) White. His wife Hazel White preceded him in death April 24, 2007. He served as a Seaman First Class in the United States Navy from 1943 until 1946 and was a Veteran of World War II. He was a past member of Salem United Church of Christ. Raymond worked for Hoefer Interiors as a floor layer before becoming certified with Salsbury Laboratories and worked as a Fieldman Inspector for Purina in Austin, TX. Surviving are one son, Eddie White of Branson, MO; one daughter, Marsha (Rick) Schoer of Warsaw; five grandchildren, Jason White, Nick White, Brent Greiwe, Ricky Schoer, and Jennifer Schoer. He was preceded in death by his parents; wife Hazel; one brother, Richard White; three sisters, Pauline Atkins, Lillian Beshears and Ruth Murphy. A graveside service with military honors will be held at 3:00 PM on Monday, July 29, 2019 at the Missouri Veterans Chapel with the Rev. Dr. Tommy Faris officiating.

The family of Raymond E. White created this Life Tributes page to make it easy to share your memories.

Send flowers to the White family.