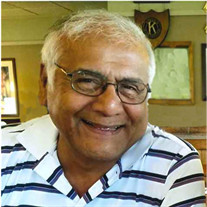 Richard Reyna, 75 of Higginsville, Missouri passed away on Saturday, March 21, 2020, at Western Missouri Medical Center in Warrensburg, Missouri. Born Sunday, June 18, 1944 in Clarion, Iowa, he was the son of the late Marcellino Reyna and the late Aurelia (Castro) Reyna. He was the husband of the late Victoria Reyna (Sorensen). She preceded him in death on May 27, 2010. Rich graduated from Clarion High School and attended Central Missouri State University (UCM) obtaining a Bachelor's in Accounting. Being a first generation Mexican-American, Rich understood the importance of freedom and love of country. He entered the United States Army in 1965 serving his country proudly. Rich worked for Bufford Thurman Real Estate before starting with the City of Higginsville in April of 1978. On April 10, 1990 he was promoted to City Clerk, working until his retirement in July of 2010. He was also the bookkeeper for the Higginsville Special Roads District. Rich was a member of the First Presbyterian Church in Higginsville and was a member of the Higginsville Country Club. He enjoyed golfing, bowling, softball, and volleyball. Rich was a member and the Treasurer of the American Legion Post 223. He was a proud member of the Honor Guard. He enjoyed volunteering for Meals on Wheels in his retirement. Surviving are one son; Brandon DeWitt of Davenport, FL; two daughters, Tara (Jason) Linn of Higginsville and Anna (Adam) Dillon of Odessa, MO; three brothers, John Reyna of Thor, IA, Gabe Reyna of Holmes, IA and Dan (Nancy) Reyna of Clarion, IA; one sister, Angel Fisher of Ames, IA; four grandchildren, Kalyn, Brittany, Jacob, and Amber. He was preceded in death by his parents; his wife Victoria Reyna; two sons, Hans Reyna and Patrick Reyna; three brothers, Joe Reyna, Mike Reyna and Frank Reyna; two sisters, Alice Stumpf and Phyllis Waddell. A Celebration of Life will be scheduled for a later date and held at the American Legion in Higginsville. Burial will be held in Glenwood Cemetery with military honors in Goldfield, Iowa where he'll be laid to rest with his wife, Vicki and their twin boys. In lieu of flowers the family suggest memorials to the Higginsville American Legion and may be mailed to Hoefer Funeral Home 1600 Main St. Higginsville, MO 64037.

Richard Reyna, 75 of Higginsville, Missouri passed away on Saturday, March 21, 2020, at Western Missouri Medical Center in Warrensburg, Missouri. Born Sunday, June 18, 1944 in Clarion, Iowa, he was the son of the late Marcellino Reyna and the... View Obituary & Service Information

The family of Rich Reyna created this Life Tributes page to make it easy to share your memories.

Richard Reyna, 75 of Higginsville, Missouri passed away on Saturday,...

Send flowers to the Reyna family.