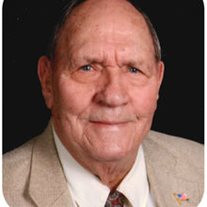 Richard C. Schowengerdt, 85 of Higginsville, Missouri died on Wednesday, June 15, 2016, at John Knox Village East in Higginsville, Missouri. Born Friday, June 27, 1930 in Higginsville, Missouri, he was the son of the late Clarence Schowengerdt and the late Lois White Schowengerdt. He married Alice E. Alpers on June 24, 1951, she preceded him in death on August 27, 2010. He was a life long resident of Higginsville and graduated in 1947 from Higginsville High School. He served in the Navy from 1948 until 1949. After serving his country he then went to work for Lefman Electric as an electrician. He later went to work for Lake City Arsenal until retiring in 1985. He was a member of Salem United Church of Christ and served on different boards and committees. He also liked to farm. Surviving are one daughter, Kathy (Bob)Teichman of Lexington, MO; two sisters, Barbara Bottemuller and Shirley Wahn, both of Higginsville; 6 grandchildren, Amy (James) Evangelista, Jason Schowengerdt, Scott Schowengerdt, Staci (Andrew) Kloeppel, Sandi (Darron) Beauchamp and Dustin (Heidi) Kloeppel and 20 great grandchildren. Richard is preceded in death by his wife Alice; one son, Paul Schowengerdt; one brother, Clarence Schowengerdt, Jr.; two sisters, Mary Elizabeth Schowengerdt and Cynthia Fincher. A funeral service will be at 10:00 am on Monday at Salem United Church of Christ with Rev. Dr. Tommy Faris officiating and Jamie Smith, organist. Interment will be in Missouri Veterans Cemetery, Higginsville, MO. The family will receive friends from 6:00 pm - 7:30 pm on Sunday, June 19, 2016 at Hoefer Funeral Home, Higginsville. Suggested memorials are to Salem United Church of Christ. Casket bearers are the grandsons and great grandsons. Online condolences may be made to the family at www.hoeferfuneralhome.com

The family of Richard C. Schowengerdt created this Life Tributes page to make it easy to share your memories.

Send flowers to the Schowengerdt family.