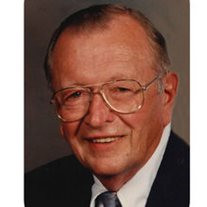 Richard "Sonny" Sherman, 89 of Higginsville, Missouri died on Saturday, April 8, 2017, at Meyer Care Center in Higginsville, Missouri. Born Saturday, March 31, 1928 in Fulton, Missouri, he was the son of the late John Sherman and the late Neva Goodman Sherman. He served as a Pvt. in the Army from 1950-1951 during the Korean War. He married Pat Ann Amor Sherman on April 9, 1960 and she survives of the home. He lived most of his life in Higginsville and was a member of Central Christian Church. He was a lifelong member of Higginsville American Legion Post #223. He formerly worked for the City of Higginsville. He was a Printer for the Higginsville Habilitation Center until retiring in 1993. Surviving are his wife, Pat; one brother, Dale Sherman of Higginsville, MO; and many nieces and nephews. He is preceded in death by his parents; one brother, John Sherman of Higginsville and one sister. A funeral service will be held at 2:00 PM on Thursday at Hoefer Chapel with the Rev. Matt Limback officiating and Rev. Steven Goughnour, assisting. Interment will be in Missouri Veterans Cemetery, Higginsville, MO. The family will receive friends from 1:00 PM to 2:00 PM on Thursday, April 13, 2017, at Hoefer Chapel. Memorial contributions may be sent to Central Christian Church. Casket bearers are Andy Sherman, Bud Sherman, John Sherman, Wayne Riekhof, Billy Morris, John Kresse and Mitch Landucci. Honorary bearers are Loralee Sweeney, Glen Heldt, Frances Heldt, Bruce Hartwig and Katrina Stewart. Online condolences may be made to the family at www.hoeferfuneralhome.com

The family of Richard "Sonny" Sherman created this Life Tributes page to make it easy to share your memories.

Send flowers to the Sherman family.