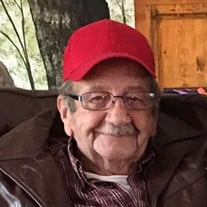 Robert Lee Beauchamp, 83 of Concordia, Missouri passed away on Saturday, November 23, 2019, at his home surrounded by loving family. Born Monday, June 29, 1936 in Humansville, Missouri, he was the son of the late Robert Beauchamp and the late Margaret Gordon (Smith). Robert graduated from William Chrisman High School in Independence, Missouri and joined the Air Force soon after in 1955. Robert married Gloria (Keith) Beauchamp in 1958. They were married 61 loving years. He worked with his dad at the family owned pizza and spaghetti house in Rock Island, IL for a while after the service, but eventually settling in with Farmland Industries until his retirement. He was a member of the Eagle's Lodge in Independence. Robert was a family man and truly loved his family. He enjoyed spending time with all the kids and grandchildren. He will be sorely missed. Surviving are his wife, Gloria Beauchamp of the home; four sons, Robert L. (Terri) Beauchamp of Albuquerque, NM, Fred (Tammy) Beauchamp of Odessa, MO, Steve Beauchamp of Austin, TX, Art (Debbie) LaLonde of Kansas City, MO; four daughters, Carrie (Mike) Goad of Warsaw, MO, Tracy Thurman of Trenton, MO, Linda (Jack) Weir of Fort Worth, TX, Becky (Jack) Wilson of Mound City, MO; one brother, Fred (Peggy) Beauchamp of Lake Monticello, VA; one sister, Cheryl Simmons of Marshall, NC; twenty-six grandchildren; twenty-five great-grandchildren. He was preceded in death by his parents; two brothers; and one sister. A memorial service with full military honors will be held at 12:00 PM on Wednesday, November 27, 2019 at the Missouri Veterans Chapel with the Rev. Dr. Greg Fine officiating. Inurnment will follow in the cemetery's columbarium wall.

Robert Lee Beauchamp, 83 of Concordia, Missouri passed away on Saturday, November 23, 2019, at his home surrounded by loving family. Born Monday, June 29, 1936 in Humansville, Missouri, he was the son of the late Robert Beauchamp and the late... View Obituary & Service Information

The family of Robert Lee Beauchamp created this Life Tributes page to make it easy to share your memories.

Robert Lee Beauchamp, 83 of Concordia, Missouri passed away on...

Send flowers to the Beauchamp family.