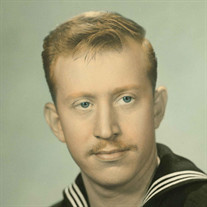 Robert B. Thaller, Sr., 80 of Higginsville, Missouri died on Monday, September 17, 2018, at Centerpoint Medical Center in Independence, Missouri. Born Monday, January 31, 1938 in Higginsville, he was the son of the late William Thaller and the late Lillian Mueller Thaller. He was a graduate of Higginsville High School, class of 1956. He was a veteran and served in the United States Navy from 1956 until 1960, assigned to the 155th Attack Squadron. As a young man he attended St. Mary's Catholic Church. After his military service he worked for Lake City Ammunition Plant for 30+ years before retiring. He did some farming in Odessa, Missouri during retirement as well. Surviving are three sons, Mark (Michelle) Thaller Sr. of Odessa, MO, Matthew Thaller of Higginsville, and Robert Thaller, Jr. of Higginsville; one brother, James (Renna) Thaller of Higginsville; three sisters, Catherine Thaller of Gladstone, MO, Ann (Darl) Mattson of Higginsville, and Helena (Charles) Thies of Atchison, KS.; and many grandchildren, great grandchildren, nieces and nephews. He was preceded in death by his parents; two brothers, Leo Thaller and Raymond Thaller; one sister, Joan Thaller; one daughter-in-law, Pamela Thaller. A funeral service will be held at 1:00 PM on Friday, September 21, 2018 at Hoefer Funeral Home with the Rev. Dr. Greg Fine officiating. Interment with military honors will be in the Missouri Veterans Cemetery, Higginsville, MO. The family will receive friends from 12:00 PM to 1:00 PM on Friday, at Hoefer Funeral Home, Memorial contributions may be sent to Family Choice.

Robert B. Thaller, Sr., 80 of Higginsville, Missouri died on Monday, September 17, 2018, at Centerpoint Medical Center in Independence, Missouri. Born Monday, January 31, 1938 in Higginsville, he was the son of the late William Thaller and the... View Obituary & Service Information

The family of Robert B. Thaller Sr. created this Life Tributes page to make it easy to share your memories.

Send flowers to the Thaller family.