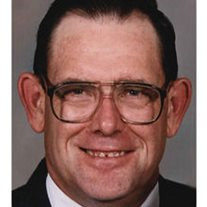 Roger D. Fricke, 71 of Corder, Missouri died on Tuesday, December 19, 2017, at Centerpoint Medical Center in Independence, Missouri. Born Tuesday, January 15, 1946 in Higginsville, Missouri he was the son of the late Ralph Fricke and the late Evelyn Catherine Heimsoth Fricke. He married Martha McGinness on April 19, 1997 and she preceded him in death on June 9, 2005. He was a life long resident of Corder, a member of Zion Lutheran Church and the past President of the Church Congregation. Roger sang in the church choir and helped whenever he could on many projects at the church. Roger worked for the John Deere dealerships in Higginsville and Marshall for 30 years. He then worked at the Frerking Elevator for 10 years and also worked at Heimsoth Agri-Service. He served as a volunteer fireman on the Corder Fire Department for 46 years. Surviving are two sons, Michael (Sherry) Fricke of Oak Grove, MO and Jason (Jaime) Fricke of Lee's Summit, MO; two brothers, Richard (Anna) Fricke of Alma, MO and Gary (Faye) Fricke of Corder; 5 grandchildren; Brandon Fricke, Kaitlyn Fricke, Kelsey Fricke, Karson Fricke and Kenzie Fricke. The funeral serice will be held at 2:30 PM Friday at the Zion Lutheran Church in Corder, MO with Pastor Mark Junkin officiating and Mary Frerking,organist.. The family will receive friends from 6:00 PM to 7:30 PM on Thursday, December 21, 2017, at the Hoefer Funeral Home. Memorial contributions may be made to Zion Lutheran Church. Interment will be in the Zion Lutheran Cemetery in Corder Casket bearers are Travis Fricke, Mark Fricke, Chris Homfeld, Chris Bargfrede, Scott Bergsieker, Jesse Dunkle and Ryan Petersen. Honorary bearers are the Corder Fire Department, Dale Parsons, Kenneth Fricke and Herbert Bock, Jr. Online condolences may be made to the family at www.hoeferfuneralhome.com

Roger D. Fricke, 71 of Corder, Missouri died on Tuesday, December 19, 2017, at Centerpoint Medical Center in Independence, Missouri. Born Tuesday, January 15, 1946 in Higginsville, Missouri he was the son of the late Ralph Fricke and the late... View Obituary & Service Information

The family of Roger D. Fricke created this Life Tributes page to make it easy to share your memories.

Send flowers to the Fricke family.