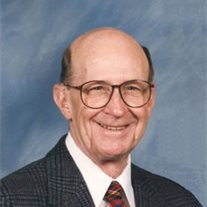 Roger W. Mason, age 84, passed away January 20, 2012, at the Missouri Veterans Home in Warrensburg, MO. Roger was born in Wellston, MO, October 28, 1927, to Grover and Emma Laeunah (Swanson) Mason and was the youngest of six boys. At age four, he was handed a guitar and thus began his musical career. Joining the army immediately after high school, Roger was assigned to the Special Services Soldier Shows and entertained the occupation troops stationed in the European Theater. Following his service, he attended Central Methodist College and received his Bachelor's in Music Education. Higher education pursuits included his Master's of Music Education from UMKC in 1970 and an Education Specialist Degree in Aviation Safety from CMSU in 1982. He met his wife of 61 years, Shirley Stewart, while attending CMC. They were married December 26, 1950, in Webster Groves, MO. They had four children: Roger (Millie), Rich (Lynda), Susie (Leslie), and Ron. In addition, they had six grandchildren, two step-grandchildren, and 12 great-grandchildren. He was preceded in death by his son Ron; one great grandson, Bennett; his parents; and his five brothers. His teaching career began in 1953 in the Blue Springs school district as band and choir director. In 1968, he moved to the Lafayette County C1 school district in Higginsville where he was director of music for nine years. After retiring from his career as a music educator in 1977, he pursued his love of flying and became an assistant professor in the Department of Power and Transportation at CMSU where he taught for the next 14 years. After retiring, Roger and Shirley moved to Columbia, MO, and were members of the First Presbyterian Church where he sang in the choir. He was a man of many hobbies which included music composition, sailing, gliding, gardening, and baking. He is survived by many loving nieces, nephews, and cousins, all of whom will miss his warm smile, great humor and loving presence. A celebration commemorating Roger's life will be held Feb. 18, 2012, at the Salem United Church of Christ in Higginsville, MO, from 1 to 4 p.m. A Memorial Service will be held at 2:00 p.m. followed by a reception in the fellowship hall. This will offer an opportunity to share stories or memories about Roger's life with friends and family. In lieu of flowers, memorials can be made to the Veteran's Assistance League, 1300 Veterans Road, Warrensburg, MO 64093 (660-543-5064 ext. 226) www.valwbg.org. Arrangements: Hoefer Funeral Home, Inc. Online condolences may be made to the family at www.hoeferfuneralhome.com

Roger W. Mason, age 84, passed away January 20, 2012, at the Missouri Veterans Home in Warrensburg, MO. Roger was born in Wellston, MO, October 28, 1927, to Grover and Emma Laeunah (Swanson) Mason and was the youngest of six boys. At age four,... View Obituary & Service Information

The family of Roger W. Mason created this Life Tributes page to make it easy to share your memories.

Send flowers to the Mason family.