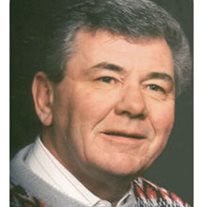 Ronald "Tubby" Summers, 75 of Gravois Mills, Missouri died on Thursday, January 19, 2017, at Winchester Meadows in Sedalia, Missouri. Born Friday, August 22, 1941 in Higginsville, Missouri, he was the son of the late John William Summers and the late Frances Beck Summers. He married Roberta Summers on November 23, 1974 who survives of the home. Also surviving are one son, Robert "Bob" Strickland of Higginsville, MO: two daughters, Susan (Patrick) Daly of Sedalia, Mo. and Carrie Tunison of Lee's Summit, MO; 8 grandchildren Nathan (Thao) Tunison, Bryan Tunison, Trae (Karley) Tunison, Kyle Tunison, Raegan Tunison, Ethan Daly, Cole Daly, and Beck Daly; 1 great grandson, Asher Tunison. He was preceded in death by his parents and one sister, Patsy Patton. He was a member of the graduating Class of 1959 0f Higginsville High School. He was a member of the Higginsville American Legion Post #223 and the Sunrise Beach American Legion Post #624. He served in the Navy from August 3, 1959 till August 8, 1962. He was a tool and die maker at Lake City Arsenal for 35 years, retiring in March 2000. A Prayer service will be held at 11:15 AM on Tuesday at St. Mary's Catholic Church Higginsville, Missouri with the Father Thomas Hawkins officiating. Vocalist will be Robyn and Madelyn Padget. The family will receive friends from 9:30 AM to 11:00 AM on Tuesday, January 24, 2017, at St. Mary's Catholic Church, . Memorial contributions may be made to St. Mary's Catholic Church Higginsville, MO 64037 or the Honor Flight.. Online condolences may be made to the family at www.hoeferfuneralhome.com

The family of Ronald "Tubby" Summers created this Life Tributes page to make it easy to share your memories.

Send flowers to the Summers family.