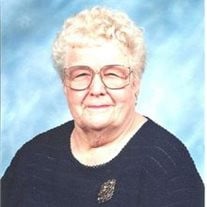 Roseleen E. (Tieman) Corder, age 82, of Alma, MO, died Wednesday, December 30, 2009, at Lafayette Regional Health Center in Lexington, MO. Roseleen attended Central Missouri's Teacher's College for one year, and taught school for one year. She worked for the Alma Post Office for over 40 years, first as a clerk, then as acting postmaster until receiving her full appointment as postmaster. She retired from this position in 1992. Roseleen was a lifelong resident of Alma, and an active community member. She was a charter member of the Alma Four Square Extension Club, a member of the Alma Community Betterment Club, and a member of the Alma Lion's club. She was a lifelong member of the Trinity Lutheran Church in Alma. She was active in the Women's Guild, and served in various capacities in the LWML. She was a member of NAPUS and served for many years as secretary for the local chapter. Mom loved to travel, and had been to all the continental United States and the state of Alaska, missing only Hawaii. Her vacations and travels most often coincided with the National Postmaster's Conventions, and visiting relatives. Her Alaska vacation with Uncle Leo and Aunt Shirley lasted almost two months, and was the highlight of her "after retirement" travels. She absolutely loved attending the Boston wedding of her grandson Sebastian, and spending the week there. Roseleen was born October 30, 1927 in Alma, the daughter of the late Martin Tieman and the late Selma (Kessler) Tieman. She married Dale Price Corder January 1, 1949. He preceded her in death November 7,1996. Also preceded in death is one sister, Shirley Ann Schlesselman. She is survived by her two Daughters, Pamela Fetter & Husband Mel of Lexington, MO; Patricia Schmalz & Husband Dennis of Alma, MO; one Sister, Marcile Kellerman of Alma; one Brother Roger Tieman & Wife Iola of Alma; six Grandchildren, Sabastian Stockman & Wife Katie of Cambridge, MA; Jonathan Stockman & Wife Michelle of Marshall, MO; Travis Fetter of Lexington; Zeke Schmalz of Alma; Sara Schmalz & Thomas Schmalz, all of Alma; one Great Granddaughter,Carleigh Rose Stockman; numerous nephews and nieces. The family will receive friends from 6:00 P.M. to 8:00 P.M. Monday, January 4, 2010 at Trinity Lutheran Church, Alma. Funeral service will be at 10:30 A.M. Tuesday, January 5, 2010 at the Church, Pastor Fred C. Hertwig officiating, Barbara Sander. organist and Paul Corder, Vocalist. Interment will be at Trinity Lutheran Cemetery in Alma. Pallbearers include Travis Fetter, Jonathan Stockman, Sebastian Stockman, Zeke Schmalz, Thomas Schmalz, Kent Tieman, Justin Moenkhoff, & Steve Schlesselman.

The family of Roseleen E. "Rosie" Corder created this Life Tributes page to make it easy to share your memories.