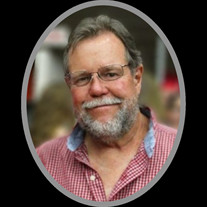 Russell Franklin “Rusty” O’Dell Jr, age 62, of Higginsville, MO, was taken home to be with the Lord on Tuesday, December 21, 2021. Rusty was born on October 2, 1959 in Kansas City, MO. He graduated from Richmond High School in 1977. After graduating he had many occupations including the Kansas City Star, Wagner Brake, Harrison’s Body Shop, Warrensburg Area Career Center, ATI, Air Filtration Co, Inc., co-owned NHRA Top Dragster race team Howard Motorsports and owned and operated O’Dell’s Radiator and Collision Repair since 1995. Rusty was an active member of the Higginsville Lion’s Club and sat on the Auto Body Advisory Board for the Lex-La-Ray Vo-Tech school. Rusty was a one of a kind soul that touched the lives of everyone he met. He mentored many aspiring young car enthusiasts in his years of owning a body shop and teaching. It was not uncommon for him to receive several calls a day from someone wanting to pick his brain or get advice and he happily made time to help anyone that asked. Rusty didn’t know a stranger and if you spent any amount of time with him, then you definitely heard a story or two. Many of them involved his favorite pastime of working on race cars. He loved hot rods, but he loved his family even more. He married the love of his life, Karen (Bennett), on May 21, 1994 and together they built a family full of love that their three children and seven grandchildren could always call home. He was so proud of each of his kids and grandkids, and was never happier than when he was spending time with his family. He is survived by his wife, Karen O’Dell of the home; daughter, Regina (Louie) Harrelson of Warrensburg; sons - Ricky (Shawna) Howard of Higginsville and Kenny Rosencrans of Higginsville; grandchildren, John Davidson, Brook Davidson, Tanner Good, Ashtyn Howard, Kamryn Howard, Jordyn Howard, and Lillie Rosencrans; brother, Chuck O’Dell; sister, Linda (Randy) Foster; and brother-in-law, Tim Amert. He is preceded in death by his parents, Russ O’Dell and Esther O’Dell-Coburn; his sister, Becky Amert and his son-in-law, Jim Eichler. A visitation will be held from 4:00 PM to 7:00 PM on Thursday, December 23, 2021 at Stewart-Hoefer Funeral Home located at 1600 Main St. Higginsville, MO. A funeral service will be held at 11:00 AM on Friday, December 24, 2021 at Salem United Church of Christ in Higginsville with Rev. Tim Biesemeyer officiating. Burial will immediately follow in the Higginsville City Cemetery. Casket Bearers: Aric Camp, Billy Hall, Steve Lile, Jesse McDaniel, Bob Nuelle, Mike Overstreet, Lawrence Ransdell, Mike Weber. Honorary Casket Bearers: Don Bartley, Don Nieman, Steve Terrell, Jim Wampler. In lieu of flowers, memorial contributions can be made to the Higginsville Lions Club.

The family of Rusty O'Dell created this Life Tributes page to make it easy to share your memories.

Send flowers to the O'Dell family.