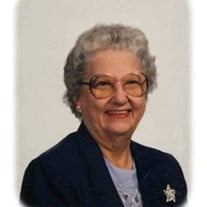 Ruth E. Harms, age 88 of Higginsville, Missouri died on Friday, January 9, 2015, at Meyer Care Center in Higginsville. Born Monday, November 8, 1926 in Corder, Missouri, she was the daughter of the late Martin J. Schnakenberg and the late Lulu (Aversman) Schnakenberg. She and Edwin John Harms were united in marriage on April 1, 1945.He preceded her in death on March 30, 1985. Also preceding her in death is one son, Robert "Bob" Harms. Ruth became a member of Immanuel Lutheran Church in April 1945. She was a charter member of the Mary Martha Circle and the Immanuel Guild for many years where she held various offices. She was also a charter member of the Lutheran Women's Missionary League and taught Sunday School for over 22 years. Living in Higginsville since 1943, she had worked at the International Shoe Factory, was a cashier at the C-1 High School cafeteria and was a door greeter at the Higginsville Wal-Mart for many years before her retirement. Surviving are one daughter, Shirley (Walter) Small of Higginsville; one sister, Mildred Heyer of Higginsville; three grandchildren, Sherry (Russ) Bradbury of Sedalia, Missouri, Michael (Cindy) Small of Parkville, Missouri and Kelly (Gary) Heinen of Kansas City, Missouri; and three great-grandchildren, AnnaBelle Small of Gladstone, Missouri, Steven and Sarah Bradbury of Sedalia. A Funeral service will be at 10:30 A.M. on Tuesday, January 13, 2015 at Immanuel Lutheran Church, 1501 Lipper St. Higginsville with Pastor Marcus Jauss officiating and Donna Owens as organist. Interment will be in the Higginsville City Cemetery. The family will receive friends from 9:30 A.M. to 10:30 A.M. on Tuesday, at the church prior to the service. Memorial contributions may be made to Immanuel Lutheran Church or Crossroads Hospice. Pallbearers are Russ Bradbury, Steven Bradbury, Michael Small, Gary Heinen, Steve Harms and Ronald Heyer. Online condolences may be made to the family at www.hoeferfuneralhome.com

The family of Ruth E. Harms created this Life Tributes page to make it easy to share your memories.

Send flowers to the Harms family.