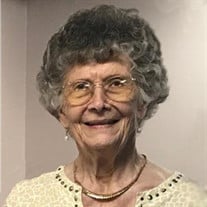 Ruth Helene Meyer (Luetjen), 93 of Higginsville, Missouri passed away on Saturday, June 27, 2020, at Meyer Care Center in Higginsville. She was born Wednesday, June 8, 1927 in Higginsville, and was the daughter of the late Gustav Luetjen and the late Olinda (Pragman) Luetjen. Ruth married Clifford Maring on September 21, 1946 in Kansas City, Kansas and from this union three children were born. He preceded her in death on October 30, 1991. Ruth would later marry Leland Meyer on August 29, 1997 and he preceded her in death on August  2, 2011. Ruth grew up on a farm in Concordia, Missouri and graduated from Concordia High School. She moved to Higginsville where she raised her children and had a long career as a seamstress. Ruth worked at the Higginsville Garment Factory until it's closing; Unitog until her retirement; and after retirement the Higginsville Walmart in the fabric department. Ruth enjoyed her retirement at John Knox Village in Higginsville. She was very active with all events and activities. Every time a John Knox activity was posted she was the first in line to sign up. She attended her fitness class regularly with enjoyment. Ruth was a faithful and active member of the Grace United Methodist Church. She enjoyed bible study, her women's circle and many other church activities. Ruth will be truly missed by so many. Surviving are one son, Greg (Dawn) Maring of Council Bluffs, IA; three step-children, Ellen (Bob) Duckworth of Fairway, KS, Karen (Ted) Davis of Nixa, MO, Carla (Olin) Struchmeyer of Mayview, MO; one daughter-in-law, Monna Maring of Harrisonville, MO; one brother, Delmer Luetjen of Aurora, CO; six grandchildren, Austin (Daniela) Maring, Chad (Danielle) Maring, Corey Maring, Derek (Amber) Maring, Katelyn Maring (fiance' Justin Nuckolls), Tracey Maring; four great-grandchildren, Ben Long, Brody Maring, Caleb Maring, Dalton Maring; one great great-grandchild, Rylie Long; and many more extended family members and friends. She was preceded in death by her parents; first husband, Clifford Maring; second husband, Leland Meyer; one son, Terry Maring; one daughter, Sharon Maring; and one brother, Herbert Luetjen. A graveside service will be held at 10:30 AM on Saturday, July 18, 2020 at the City Cemetery with Rev. Terry Cook officiating. Casket bearers: Austin Maring, Chad Maring, Cory Maring, Derek Maring, Katlyn Maring, Tracey Maring. Memorial contributions may be made out to Grace United Methodist Church or Preferred Hospice and mailed to Hoefer Funeral Home 1600 Main Higginsville, MO 64037. This service is open to the public but social distancing and masks are recommended.

Ruth Helene Meyer (Luetjen), 93 of Higginsville, Missouri passed away on Saturday, June 27, 2020, at Meyer Care Center in Higginsville. She was born Wednesday, June 8, 1927 in Higginsville, and was the daughter of the late Gustav Luetjen and... View Obituary & Service Information

The family of Ruth H. Meyer created this Life Tributes page to make it easy to share your memories.

Send flowers to the Meyer family.