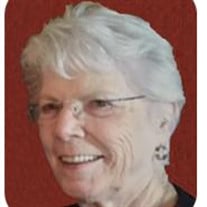 Sarah Margaret (Blake) Vollenweider, died peacefully on Tuesday, January 8, 2019, at her daughter's home in Kansas City, Missouri. She was born on Friday, February 21, 1930 in Higginsville, Missouri, to the late Roy Blake and the late Rhoda (Porter) Blake, where she lived nearly seventy years. She graduated high school in Higginsville, class of 1948 and immediately earned her cosmetology license. She owned and operated her own beauty shop on Main Street in Higginsville for a decade. In 1950 she married Lester L. Bertz of Lexington, MO until their dissolution in 1981. From this union Martha Jane and Leslie Ann were born. In 1969 Sarah returned to the workforce as the cosmetologist at the Higginsville Habilitation Center where she worked until her retirement in 1989. In 1988 Sarah married Robert K. Vollenweider who preceded her in death on January 22, 1990. Sarah was a voracious bridge player, enjoyed reading, needlework, and crossword puzzles. She relocated in 1999 to Gladstone Missouri to be near the activities of her three granddaughters. She was a life-long member of the Christian Church (Disciples of Christ) at the Central Christian Church in Higginsville and later at Park Hill Christian Church in Kansas City. Surviving are one daughter, Leslie (John) Flagler of Kansas City; three granddaughters, Erin Flagler of Kansas City, Caitlin Flagler of Nashville, TN, and Jillian Flagler of Fayetteville, AR; one sister, Ann Fischer of St. Louis, MO. She was preceded in death by her parents; husband Robert Vollenweider; first husband, Lester Bertz; one daughter, Dr. Martha Bertz, and one sister, Dorothy Morgan. A funeral service will be held at 2:00 PM on Saturday, January 12, 2019 at Central Christian Church in Higginsville with the Rev. Robert Fugarino officiating. Interment will follow in the Higginsville City Cemetery. The family will receive friends from 6:30 PM to 8:00 PM on Friday, January 11, 2019, at the Hoefer Chapel in Higginsville. Memorial contributions may be sent to the Central Christian Church - Window Restoration Fund.

Sarah Margaret (Blake) Vollenweider, died peacefully on Tuesday, January 8, 2019, at her daughter's home in Kansas City, Missouri. She was born on Friday, February 21, 1930 in Higginsville, Missouri, to the late Roy Blake and the late Rhoda... View Obituary & Service Information

The family of Sarah M. Vollenweider created this Life Tributes page to make it easy to share your memories.

Send flowers to the Vollenweider family.