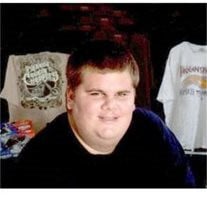 Sean Wells, age 20, of Higginsville, Missouri died on Friday, September 24, 2010, at Research Medical Center in Kansas City, Missouri. Born Monday, May 21, 1990 in Warrensburg, Missouri, he was the son of James Wells and Carol Spencer Wells. He was preceded in death by his father. Sean was a lifetime resident of Higginsville, & a 2009 graduate of Lafayette Co. C-1 High School. Currently attending Wentworth Military Academy junior college, he was participating in their pilot EMT online course program. He was a member of the Higginsville Boy Scout Troop #415 earning his Eagle Scout in 2006. He was a member of the Tribe of Mic-O-Say, given the name of "Son of Deep Running Wells" and a member of the National Eagle Scout Association, member of the National Technical Honor Society, Lafayette Co. ARES (ham radio organization ), & alongside his Dad, helped with CERT and Youth Commission functions in Higginsville. He was a member of First Baptist Church. Sean had worked at McDonald's and then currently worked at Wal-Mart in Higginsville. Survivors include his mother, Carol Wells of the home, an aunt, Lois (J.D.) Cossey of Cave City, Arkansas; and an uncle, Dennis (Mai) Spencer of Tucson, Arizona. A Funeral service will be at 10:30 a.m. on Wednesday, September 29, 2010 at First Baptist Church located at 1907 Peach St. Higginsville, with the Dr. Greg Fine officiating & Marsha Madole as organist. Interment will be in the Higginsville City Cemetery. Pallbearers include Andrew Lockhart, Anthony Hoover, Randy Carlson, Andrew Nevels, Peter Thaller, Cody Meyers, Zach Green & Phillip Wooden. The family will receive friends from 7:00 to 8:30 p.m. on Tuesday, September 28, 2010, at Hoefer Funeral Home, 1600 Main St., Higginsville. Memorial contributions may be sent to First Baptist Church Building Fund or Higginsville Boy Scout Troop #415. Online condolences may be made to the family at www.hoeferfuneralhome.com

The family of Sean B. Wells created this Life Tributes page to make it easy to share your memories.

Send flowers to the Wells family.