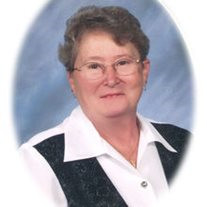 Silvy G. Brooks, age 71 of Linn Creek, Missouri, formerly of Corder, Missouri, died on Friday, June 21, 2013, at Lake Regional Hospital in Osage Beach, Missouri. Born Sunday, July 27, 1941 in Nimptsch, Germany, she was the daughter of Herbert Nitschmann and Leisbeth (Heimann) Nitschmann. She married Albert C. Brooks August 17, 1990. He preceded her in death December 15, 2002. Also preceding her in death are her parents and two brothers. Mrs. Brooks was a homemaker and also worked as a hair dresser in Germany. She lived in Corder for 22 years, then moving to Linn Creek in 2010. She was a volunteer at the Lamb House in Camdenton, Missouri and a member of the Presbyterian Church in Osage Beach, Missouri. Surviving are three sons, Mike (Jaci) Palmer of Fountain , Colorado, David (Shannon) Palmer of Nickerson, Kansas, Douglas (Sabrina) Palmer of Kansas City, Missouri; one daughter, Donna Bell of Linn Creek, Missouri; one step-son, Jamie Brooks of Independence, Missouri; one step-daughter, Jeannette Brooks of South Carolina; 12 grandchildren and 8 great-grandchildren. A Funeral service will be at 2:00 P.M. on Tuesday, June 25, 2013 at Hoefer Chapel,1600 Main St. Higginsville, Missouri. Interment will be in the Missouri Veterans Cemetery, Higginsville. The family will receive friends from 1:00 P.M. to 2:00 P.M. on Tuesday prior to the service. Memorial contributions may be made to Presbyterian Church Building Fund in Osage Beach, Missouri. Casket bearers are Jason Palmer, Tyler Palmer, Josh Ferguson, Jimmy Sohm, Austin Palmer and Ed Brown. Online condolences may be made to the family at www.hoeferfuneralhome.com

The family of Silvy G. Brooks created this Life Tributes page to make it easy to share your memories.

Send flowers to the Brooks family.