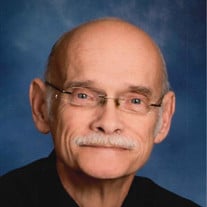 Steven Ray Genser, 65 of Higginsville, Missouri died on Thursday, July 19, 2018, at KU Medical Center in Kansas City, Kansas. Born Saturday, April 18, 1953 in Lexington, Missouri, he was the son of Glendon Genser and the late Barbara (Hurst) Genser. He served as a Master Chief Petty Officer in the United States Navy from 1975 until 1995. He was a Veteran of the Gulf War and a radar technician for the Federal Government, retiring in 2015. He lived in Seattle, WA for ten years then moved to Conway, AR for five years, before moving back to Higginsville in 2015. He was a member of First Baptist Church. Surviving are one daughter, Maria (Chad) Elwood of Kansas City, KS; his father, Glen Genser of Higginsville; one brother, Keith Genser of Corder, MO. He was preceded in death by one brother, Gary Genser; one sister, Evelyn Ferlet. A memorial service will be held at 1:30 PM on Monday, July 23, 2018 at First Baptist Church. Inurnment with military honors will follow the service in the Missouri Veterans Cemetery, Higginsville, MO. The family will receive friends from 12:30 PM to 1:30 PM on Monday, July 23, 2018, at First Baptist Church. Memorial contributions may be sent to First Baptist Church or the KU Cancer Center.

The family of Steven Ray Genser created this Life Tributes page to make it easy to share your memories.

Send flowers to the Genser family.