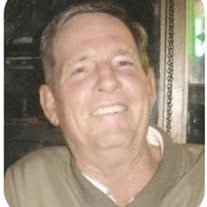 William Stuart "Bill" Doak, 70 of Centerview, Missouri died on Tuesday, March 13, 2018, at his home. Born Sunday, March 16, 1947 in Kansas City, Kansas. He was the son of the late Forrest Eugene Doak, Sr. and the late Marjorie Gilkey Doak. He married Yun Chong Hui on August 29, 1967 and she preceded him in death on March 3, 2013. He served in the Army. He lived most of his life in Kansas City, Missouri where he was a general manager at Koch Asphalt retiring in 1980. He moved to Corder, Missouri in 1989 and then to Centerview, Missouri in 2014. He was a member of Corder Baptist Church and the Corder V.F.W. Post#4288. He enjoyed fishing, the Kansas City Royals and the Kansas City Chiefs. He loved visiting with friends and family at the Lake of the Ozarks. He was a professional bowler and bowled multiple 300 games. Surviving are three sons, Billy Kun (DeAnna) Doak, Lincoln Daniel (Vicki) Doak and Christopher Lee Doak, all of Centerview, MO; one brother, Forrest Eugene (Jo Anna) Doak, Jr. of Kansas City, Kansas; six grandchildren, Donna Jordon Doak, Tiffany Nicole Doak, Ashton Doak, William Doak, Brooke Doak and Daniel Doak. He is preceded in death by his parents; his wife; one son, Eugene Tae-Kuna Doak; one brother, Richard Allen Doak; one sister, Donna Doak. A funeral service will be held at 2:00 PM on Friday, March 16, 2018 at the Hoefer Chapel with the Rev. Ron Gross officiating. Interment will be in the Calvary Cemetery, Corder, MO. The family will receive friends from 6:00 PM to 7:30 PM on Thursday, March 15, 2018, at the Hoefer Funeral Home. The family request in lieu of flowers memorials be made to Missouri Veterans Home in Warrensburg or Johnson County Hospice. Casket bearers are Dave McGuire, Rodney Doak, Darryl Darnell, Will Doak, Ronnie Sims and Dale Doak. Honorary bearers are Steve Scott, Mike Doak and Vernon Doak.

The family of Stuart William "Bill" Doak created this Life Tributes page to make it easy to share your memories.