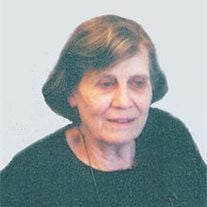 Sue Sutherland, age 84 of Higginsville, Missouri died on Thursday, June 27, 2013, at her home. Born Wednesday, January 30, 1929 in South Bend, Indiana, she was the daughter of John Scrogham and Ethel Swallow Scrogham. She married Robert Sutherland on October 3, 1947. Mrs. Sutherland moved to Higginsville in 1968 from Windsor, Missouri. As well as being a homemaker, over the years she worked as a bookkeeper for MFA Grain Division, a check out clerk for IGA and worked at the Higginsville Advance. She was also an active bridge player with several bridge clubs. Surviving are her husband Robert Sutherland of the home; sons, Ron Sutherland of Kansas City, Missouri, John Sutherland of Cambridge, Massachusetts, Ray (Jill) Sutherland of Higginsville, Roger Sutherland of Panama City, Florida; two sisters, Beverly (Paul) Williams of Belton, Missouri, Faye (Bob) DeRenzy of San Diego, California; 4 grandchildren, Steven (Emily) Sutherland, R.J. Sutherland, Megan (Tim) Trigg, Anson (Melissa) Sutherland.; 2 great grandchildren, Brynna Wentland and Mason Sutherland. She was preceded in death by her parents an one sister. A private memorial service will be at a later date. Memorial contributions may be made to Family Choice. Online condolences may be made to the family at www.hoeferfuneralhome.com

The family of Sue Sutherland created this Life Tributes page to make it easy to share your memories.

Send flowers to the Sutherland family.